Coping Block Skateboarding Magazine was the first publication to interview the Pineiro Brothers, back in December 2009 in Coping Block Issue #32. At that time it was easy to recognize the potential and the current skill of these two talents. Since then Steven Pineiro has competed both at the Maloof Money Cup and in the X-Games, not to mention his new PRO model from Embassy Skateboards! Coping Block Skateboarding Magazine is proud of these two and we know that with their skateboarding talents, this is only the beginning of a long and impressive imprint they will place on Skateboarding. The following is that previous conversation with the Pineiro Brothers, enjoy! 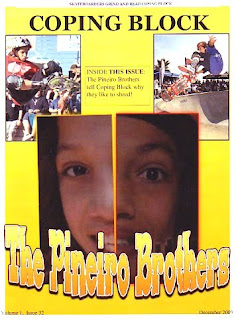 You might do a double take while watching these two shred everything they skate. The fast rising Pineiro Brothers are close in height, looks, and rip up skate parks equally. I had the pleasure of meeting these two exceptional talents and they are for real! They have been given the proper skateboarding growth fertilizer that all kids need, supportive parents whom gladly take them to all the skate events they possible can. When it comes to their skating abilities, don’t take my word for it, pull these two up on YouTube and let their skating speak for them!
I’ve been skateboarding and around skateboarding since the seventies, which gives me a pretty good eye for talent. The first time I saw the Pineiro Brothers skate, was at the Stirling Skate Park event in Dunedin, Florida. Most recently I witnessed them shredding at the Cocoa Beach Skate Park, Grind For Life Benefit. The Pineiro Brothers put on a clinic, of which I remain impressed at the passion and hours of dedication they’ve put into their skating. Their rising talents represent the new blood that pumps life into each successive generation of skateboarders. Florida’s really blessed to be newly represented by such explosive skating skills, which seem to be expanding like the universe. It’s only a matter of time before the rest of the world gets to experience the energy these two skateboarding brothers generate.

When did you two decide that you wanted a skateboard?

About 3 years ago at the ages of 9 and 10 we got lost going to the beach and ran into the Atlantic Beach Skate Park . There we saw a four or five year old kid name Noah dropping in and we were amazed by it. The very next day it was on!!

How long after getting your skateboards did you guys realized that you loved the sport?

Steven: Right away it was magic!!

How many hours per week would you say you two are at a skate park riding?

Steven: It all depends on the weather, my fathers work schedule, and how good we are doing in school. About two to three hours on the weekdays, and usually the whole day on weekends. So, about thirty hours total per week.

Steven, which do you prefer, ramps, bowls, or pools?

I love them all the same.

What about you Juan?

I prefer ramps, but I like Pool and Bowl skating too!

Sometimes, it really depends on the trick. But most of the time we work on different tricks.

Do you two share the same preference for wheels?

YEP! Type-S they are so fast for us tranny skaters.

How many contests would you say you two have been in at this point?

We lost count but, between the local, state and across the USA a little over 100 and counting.

Do you guys prefer a jam format or a three individual run format?

JAMS! But when they are under control and nobody gets hurt. We have been hurt a few times being so small and going against bigger and older guys it's very dangerous.

Juan, how often do people call you by your brother’s name?

All the time! We are NOT twins, but we are 11 months apart and look a lot alike. 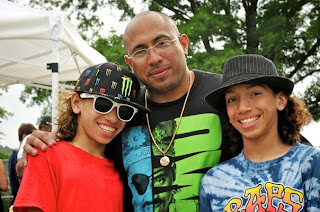 Steven, are there many skaters at your school?

Not so many, out of the few that skate none are as into it as I am.

What do they say about your skateboarding?

We usually keep ourselves low key but the people at school that know we are skaters and that have seen us skate think we are amazing.

I see that you two have traveled to some other parks around the country,
which skate park did you two really like?

Lake Cunningham Regional Skate Park in San Jose, California is one of our favorites.

What other skaters do you two skate with on the regular?

I see that you guys met one of my all-time favorite skaters, Steve Caballero. Where and when was that meeting?

Lake Cunningham Regional Skate Park in San Jose, California the last week of September 2009 on the weekend event of the 11th annual Tim Brauch Memorial. Steve was super cool with us .

Juan, what skateboarder impresses you the most and why?

Mason Huggins from the Bacon Team because he's just amazing and carries a sweet bag of tricks and knows how to skate a comp.

Bucky Lasek!! and Why? because he's Bucky.

Let’s say you two had the power to take one element from four different skate parks, and put them together to create your favorite skate park, what sections would you include and from which four skate parks? You can answer that separately.

Steven, if you had your own board design what would your deck graphics look like on the bottom?

I'm a big Creature Fiend so pretty much that type & style of graphic.

Juan, what drives you to become a better skateboarder?

My brother Steven drives me to become a better skater, because I
can't skate without him.

Where is the one place your parents take you two to eat that you guys just love the most?

(I see a television commercial coming out of this!)

Steven, what new trick are you working on right now? Do you have a favorite trick?

I'm working on my 720 on vert which I've landed on spine, but right now I’ve got to say it”s my McTwist, fakie to fakie 540 and of course my Rodeo 5 are my favorite tricks.

Juan, what is your favorite trick and what are you working on right now?

I think that street skating is amazing, but was not made for me. 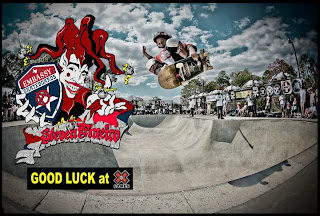 Embassy Skateboards made a well advised investment in raw talent.

There has got to be one park that you two really want to skate, which is it?

Actually it's two places The Combi Pool in the Vans Skate Park in Orange, California and Woodward in Pennsylvania.

Steven and Juan, how far do you two want to take your skateboarding?

Steven: I just To be well known and successful before I go to college because at that time whatever is my skating status I'm taking a break to get me a degree.

Juan: To be a worldwide recognized Pro skater before it's my time to go to college and that is non negotiable.

Steven, what do you like most about vertical skateboarding?

Juan, if you could pick your all-time favorite cereal, what kind would it be?

Whose skateboard lasts the longest?

It really depends on the board's luck and what king of surface we are skating the most, but concrete is the most brutal on our boards.

Have you guys tried to get your father on a skateboard yet?

Yes!, he does have a longboard that we won in a comp, but he was more into BMX and Roller Skating.

If someone wants to catch you guys skating, where might they have the best chance to witness some of your power runs?

Kona's pool because it's pretty much our local park.

Would you two like to thank anyone at this time or give a shout out to anybody?

We would like to thank GOD, My Father who always believes in
and never give up on us, my MOM and our two sisters Stephanie
and Killiam, the few sponsors we have and last but not least Martin
Ramos and James Reeds for their support and awesome parks.