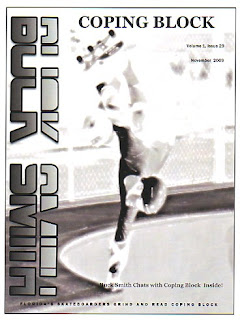 Buck Smith has always impressed, he is the definition of a dynamic skateboarder. Ramps, Bowls, and Pools fear his galatic Power. He has ripped hard since he was a spunky little shorty, blasting bio airs and mega runs on KONA’s half-pipe. No one questions his skill, courage, or intestinal fortitude once you’ve witnessed his skating, especially boneless ones off the megalith tombstone in KONA Skate Parks infamous Kink Bowl. Buck let’s his skating speak for him and his skating speaks loud and clear. 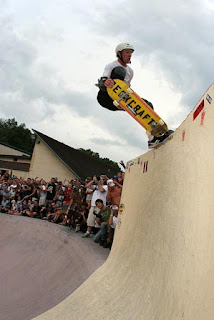 
Buck as far back as I can remember you have always been ripping it up! Kona ramp contests, Florida Backyard Ramp Series, Grigley’s Ramp Contests, there you were flying high and fast, how long have you been skating now?

I stared skating on the hill in front of my house in 75 or so. I’ve been skating ever since.

Is there any particular ramp from the past that you miss skating?

Maybe not ramps so much, because they did kind of suck back then, but the sessions that went down. Ramp Ranch in Atlanta, Grigley’s ramp in St. Pete, and obviously Kona.

From your early days Buck, who were the skaters you sessioned with on a weekly basis?

The local guys like Bryan Farbogoli, Shaun Adams, and Bill Hodge. And then there were the Florida locals like Chris Baucom, Shawn Petty, and Billy Beauregard who were around Kona all the time.
How important was it for you to have KONA Skate Park around as a kid?

I was already surfing and skating, but Kona was built right by where I lived in ‘77. Obviously Kona was a gateway for me and skateboarding.

Do you remember your first skate contest and how you felt competing as a grom?

Back then there were no such things as groms. We were little 10-year-old brats and skate contests were just local weekend events. My first skate contest was in 1977, Seven eleven, U.S. Open at Kona. Henry Hester disqualified me for pushing down the snake run; I was about 9 years old. Plummer won downhill that year. 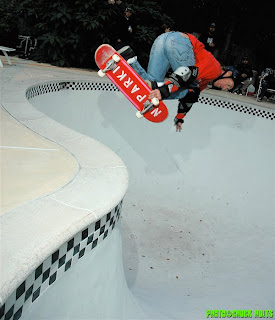 
You are currently riding for Deckcrafters, but who were your other sponsors from back in the day?

Bruce Walker started me out and got me on Gull Wing, then I hooked up with my old friend Mike Folmer who had talked about getting me on Sims. After about a year on Walker, I went to Sims, and then much later on I went to Vision.

How did you hook up with Deck Crafters?

Well, Chulk Hults was working for Paul Schmitt and showing him what was up with wood back in the Tampa days. So Chuck and Paul made me my first custom board out of Paul’s rental storage units down there. Then Paul went into business with Vision owner, Brad Dorfman, who owned the team I skated for. When I went pro for Sims my buddy Chuck Hults ran the whole wood shop and designed my board and has designed every board ever since.

How far away from home has skateboarding taken you?

The Arctic Circle in Finland, the sun went down for three hours.

Buck what pushes you to attack and destroy KONA’s gnarly tombstone? 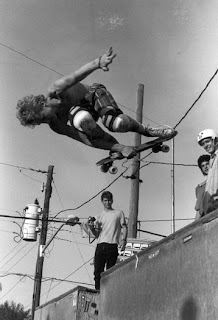 Why do you climb the mountain?

What skater or skaters influenced you the most?

Obviously George Wilson who rules and Plummer, then later Shawn Petty, Baucom, Beauregard, and that one guy Monty Nolder.

There’s been chatter that a Skate Park might be built with replica pools and bowls from legendary Skate Parks from the past. If you were asked what pools you’d like to see in the park which would you suggest?

Nah, I don’t want to replicate any old kinks. The new skate park guys got plenty of tricks up their sleeves.

What’s the gnarliest trick that you are killing right now?

Buck what’s the skate vibe like out west versus the east coast?

It just depends on where you are and whom you’re with.

When you aren’t on your skateboard tearing coping apart, what else do you enjoy doing?

Surfing and skating together as a family with my wife and daughter.

What’s the easiest way for a skater to purchase a Buck Smith Pro Model?

You’ve been apart of many a skate session, what is the sickest thing you’ve seen during one of those skate sessions?

So many good sessions it’s hard to choose just one.

You were inducted into the Florida Skater Hall of Fame this past year, you are now officially one of Florida’s best ever, how does that make you feel?

It’s really cool being in the club with all those guys.

Please select one of the following “Old School” completes:

Looking back on your early skate days is there anything you would change if you could?

Buck you’ve had a lot of success in skateboarding, is there any person or person’s you’d like to take the time now to thank or give a shout out to?

I’d like to thank Bruce Walker and the Ramos family, and all my skate buddies and especially my family.