The Don Hillsman Interview is brought to you by: 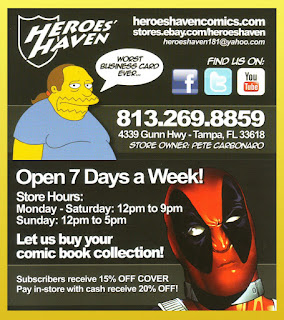 In every skate community you hear stories about some radical skater.
A skater not known by the masses, but known only by the stoked few lucky enough to have witnessed first hand this raw talent destroy a particular pool or ramp. In each instance a description of this skaters skills sounds unbelievable or like an urban myth. There are those who have claimed to have seen Bigfoot, UFO’s, Moth Man, Swamp Man, Lizard Dogs, and beings from places beyond our imaginations. But in this case, no investigation is needed. Coping Block has complied all the evidence needed into one neat package for the whole world to see. This skateboarding legend is real and in the flesh. It’s time to open your eyes, and see the truth for yourself, Don Hillsman is no joke! 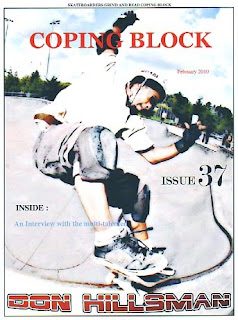 Don you’ve lived in both Florida and Georgia, where did you originally come from and how long have you’ve been Skateboarding?

I was born in Atlanta Georgia, Grady Hospital, May tenth nineteen sixty five, and I know the exact date I started skating, June twenty seventh nineteen seventy seven. Hooked like it was crack.

Somewhere in Georgia you had a crew of skaters that you sessioned with frequently, who were the skaters in your original skate crew, and where did you guys skate?

The ATL original (1st generation) crew was a bunch of guys from Atlanta, mostly from the "Swass" side (southwest) of the city. Big Mark Tucker, Lorenzo Chase, Anthony Shields, and myself made up our core. We would meet up at Mosley Park pool and skate it, or go to one of the parks, mainly National Skate Park or the “Tube” in Doraville. When skating died & re-surged in the 80's, the crew consisted of Mark Tucker, Chris "Gomez" Brown, Fred Reeves, Martin Marshall, later Gary Betzel, "Psycho" Dave Houser, "Fila" Chris and a few others who were down for it.

Anybody who has witnessed your skating gets blown away at the variety of tricks you unleash, your power and flow, plus your determination to pull off a completely sick run! What’s inside you that pushes you so hard?

I hate Bailing. Seriously, I hate bailing. My philosophy towards skating is this: Fun in this sport is exponential. If one trick is hella fun, then if I learn a hundred stunts, I can have 100x time more fun than the next guy. I'm almost 45...and I believe I will stop learning tricks when I die. Why not progress and have more fun? I never wanna be that old guy in the park, y'know? I mean I will be (soon, if I keep cracking things) one day, but you only have one life to live, and if skating is your passion, freaking do it.

Who are the sickest skaters from your old stomping grounds?

Where did you and your crew go to get your munch on back in the day?

Mellow Mushroom Pizza, or Zesto's if I have any say over it.

What skate shoe do you prefer and why?

Lately I’ve been blessed to get shoes from my shop sponsor, Woody's Half-pipe in Georgia, and my old favorite, Vans. But I will also use Vox or Fallen if they are available, size 7 1/2 or 8 people. Some of you Reps please hook a brotha up. 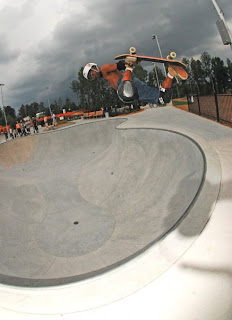 
You’ve spent many hours skating around the southeast, where are your favorite places to skate?

Currently I'm enjoying all the parks up in the A. Most are 20-40 minutes from each other...and more to come. It’s bangin' up here. Come skate Brook Run with me, Cleo! Seriously, the parks and people here speak for themselves, straight coolness, and so much fun Crete.

Are you sick of small kids asking you if you can McTwist?

Most don't know that I’ve done it, but back in my day (run now from this interview) few could do it. It really boosted my confidence / ego when I made it in '84-85. Now I have to relearn it, 'because frankly it shrivels me nads to spin around now, but I’m gonna relearn them in about a week or so, once I can do Front side 540 on lock.

What tricks are you currently working on?

Mostly trying to regain my board control back. Kick flip Mute, Front side 540's (keep over-rotating), Front side 720, a bunch of little Lip and Fakie tricks, going higher and farther...and not bailing.

How do you keep yourself in skate shape?

I work out a little (cause frankly I’m lazy) to maintain my girlish figure, Harass senior citizens and play "chicken" with cops. I love grappling / sparring when I can afford it, hitting a heavy bag for about an hour and so on.

Don, how does your family feel about your involvement in the sport?

I met my wife at my ramp, so they are reeeeaaaallll used to it. All my Wife wants for me is to be happy at something, so I came back to skateboarding. She is so cool about everything.

I was really stoked to find out the type of work you do on the regular. Please explain the actual process that you are involved with in the creation of Comic Books.

Well, if my client is Marvel, DC, whomever, I get a script to breakdown in “panel to panel” form of what the writer is looking for. I draw / sketch it up then put it down on paper. If I don't utterly hate it, I will then ink it (adding black line over the pencils) and send it off to a colorist, unless it’s a painting.

What are some of the comic book titles that you have worked with?

I’ve worked on a bunch of stuff in the past few years. The Story of Jack Johnson (inks, online), Gambit, X-Men, Superman / Batman, JLA, FF, and God knows how many trading cards, I have no idea anymore. They kinda blur together after a while...and my own projects, THE PLANET-KILLERS and STAGGERLEE. Please check out my website daly-WWW.DH2PROWORKS.BLOGSPOT. COM for more artwork sheeples.

There are now going to be much older divisions in bowl, ramp and pool competitions, might we see you in some in the future?

Yeah, Steve Cab told me I should enter and see what I could do. I entered one of the Georgia Bowl Riders (Brook Run) contests, promptly broke my elbow but hung on to get 2nd place. Contest make me nervous...I would just rather skate a good session.

From your perspective, what’s the biggest difference between the Georgia skate scene and the Florida skate scene?

What place have you always wanted to skate, but never have?

Have you ever considered starting your own skate company?

I used to have a small company in the 90's called Syndicate Skateboards until I practically had a nervous breakdown over it .It was fun, but a lotta work I did mostly myself as well as keep a 9-5. Lotta good times with my team, I may do one again one day but with serious help though.

Did you have your own PRO model at one time?

I had a deck from Epic Skateboards, A model from Steadham Skateboards, and I was riding my prototype on Syndicate. I feel like I'm forgetting one.

Are you currently on any flow lists, because if not, you really need to be?

My sponsors have all been cool to an old dog like myself- I ride for GIVEN Skateboards, Woody's half pipe and I'm currently working with the good folks at ZION Skate Park in Watkinsville Ga. If any shoe/helmet/pads/ reps wanna flow, lemme know. I’m digging O.G. status. I was riding for the cool guys at REVEAL Skateboards until recently. They’re still my people though.

What set up are you currently riding?

I'm riding a GIVEN team deck drilled especially for my short self, Type-S wheels and old-ass Indy trucks from 89-92,cause, well, I can.

What’s the biggest half-pipe or bowl you’ve ever shredded?

Anything 14ft or higher, I remember taking Micke Alba, Ben Schroeder and few guys to the Swamp Monster ramp in Savannah. That thing had a 15ft extension. It was totally scary back then. 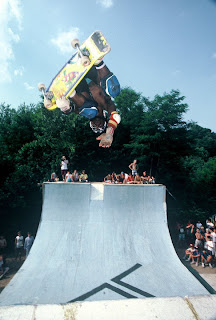 
Who are your all time favorite skateboarders?

What skaters would be in your dream session with you and where would the session take place?

All the cool people I’ve met and skated with in the past on a cruise ship to Jamaica skating a mini / pool / half thing of my design. For at least a week, all expense paid. That would make me happy.

Don, what music do you like to skate to?

Lady Gaga and Cher. I am pretty eclectic with me tastes, I like Hardcore Hip hop, Dark Ambient, Metal (no hair bands), Punk rock, Roots /Ital/ Dub / Dancehall, Psychedelic stuff like Can and Saucer full of Secrets Pink Floyd, Hawkwind type stuff. Anything Bo Maddox will not skate to. Ha!

Who’s the most important figure in your skate history and why?

My Grandmother and my Wife. They supported me doing my thing when no one else would. Period. I would've quit if it weren’t for my wife. I owe her my sanity, and my Grandmother more than I can pay back. My little sister Tammy for helping me steal wood and stuff for my ramp awhile back and all ways keeping my head up.

Where do you see your involvement in skateboarding headed in 2010?

Not getting any more damage to my body. Learning how to have more fun. It’s almost 2012. Doing board graphics for a few board companies, becoming more involved in throwing contests for those who wanna test their skill, judging a lot more contests.

Have you ever considered designing a skate park, and if so what would it be like?

I have tons of skate park sketches I do for fun. I was supposed to design one for Atlanta, but the guy pulled out of it. I extrapolate ideas from all the parks I go to and draw what I think is functional, fun, and challenging.

Don, you really rip hard man, do you think your skating got all the credit it deserved?

Honestly, I wish all of the East coast had gotten more coverage. We used to have to almost be threatening to get the Mags to come out and show love. Bryce Kanights, Rick Blackheart showed much love from Thrasher. I knew guys that would KILL on West coast cats, but got no coverage 'till they shuffled out to Cali (myself included). For example, I hated making up a trick to find out someone else got credit for it. A personal pet peeve of mine. Rodeo Flip/True Front side 540 (1986), Fakie to Fakie 540 (Front side gay twist revert 1990), Windshield Wiper (Fakie to Front side rock slide to revert out 1990) are what I'm claiming as mine.

What would it take for you to move to Florida on a permanent basis?

Hah! I’ve been in the Tampa / Clearwater / New Port Richey area since 1999, I just shuffle around a lot. I need more $ to make all things wonderful happen on the house front. I love my home city though, Peace Up, A-Town down for life. No matter where I lay my noggin. East Coaster 'till I die, homey. BBS 4-eva.

What do you have to say to the kids that are just starting to skate?

Learn by observing, analyzing, and applying your tricks so they can be made easier. Don't rush, have fun, knuckleheads. Show a young Lady how to skate. Stop worrying about what others say and do when you skate, just do YOU. Stop telling me you’re "just a" type of skater. No one cares to hear your fear. Fear is a mind-killer, an imagination destroyer. Remember, on the other side of fear is the fun. So drop in already before I push you in, grommet.

Any thanks or shout outs at this time?