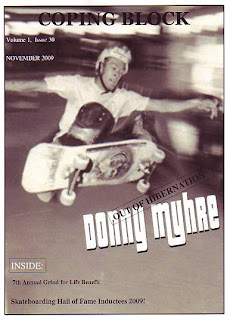 
Donny Myhre‘s fresh clean style has always made hard tricks look easy. Donny’s history of consistently ripping hard on vert caught the watchful eye Zorlac Skateboards, which stepped up and gave him a PRO model before someone else did! Donny has ground coping around the globe and even after a major femur break is back grinding the lip. Coping Block found out where Florida’s missing skate gem was located, and he agreed to break his silence.


Donny, when did you first pick up a skateboard?

You were a Gainesville local back in the day, who made up your local skate crew?

Back at Sensation Basin I skated mostly with Chris Baucom, John McGuigan, Billy McCormick, Rodney Mullen, Monty Nolder and Sam Myhre. After the Basin we had Lakeside ramp-that crew was Monty, Bill Poulin, Sam, Mike Hetrick and Andy Elliott. Late in the 1980's we had Williston Road Ramp, and then the Jonesville Ramp with Mike Frazier, Jimmy the Greek, Michael Martin, Chuck from Hell, Trip Walker and Robb Bjorkland. Roller Dave was the man!! He kept us going with the great ramps. 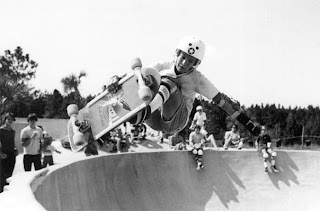 You've been skating for how long now?

Since 1976 when I got my first Bigfoot board. I never quit, except when I had a compound fracture of my femur. 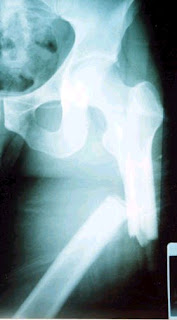 A Motorcycle accident almost took Donny out the game!

When did you first get sponsored?

I was on the Sensation Basin B team and had a co-sponsor from Walker, about 1980-ish. My first real sponsor was Tracker and first board sponsor was Zorlac in about 1986. I sent them a letter with photos asking to get sponsored and boom it was on.

Who are your favorite Florida skaters of all time?

Of all the Florida skateboarders, which one influenced your style the most?

I never really worked on my style like Rodney and some others. Monty, Frazier and Stanton were the ones that really pushed me to learn tricks and go bigger.

You’ve been collecting decks for a long time, what are some of your prized Skateboards.

What were the determining factors for you when you turned PRO?

I was doing pretty well in the contests, NSA, Germany and some others, so I kind of got pressured into it. I went to sign up for another NSA am contest and Sonja Catalano was like, “no you can't skate in the am contest”. I knew it was time to move up after that. 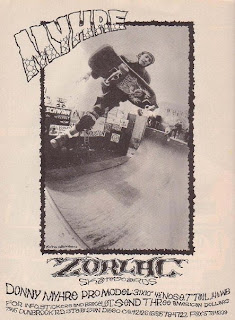 
How did you come up with the "Alligator" graphic design?

I definitely had a lot of Florida pride and supported the east coast skate scene. I thought if you went out to Cali to live then you were a sell out and you were abandoning your roots. (I was young and naive) Coming out of Gainesville, what could better represent North Florida than the gator? So that's what I went with. I talked with Pushead and told him what was important to me and he gave me his version of the gator. 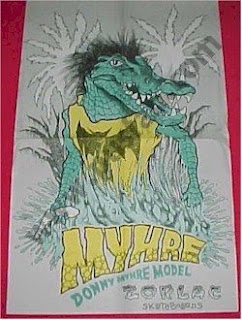 Who do you skate with now?

I skate with a group of old timers here in Franklin, TN, it's a suburb of Nashville, and they call themselves Team Geritol. I enjoy skating with Jim Decola, Jessie Myhre, Nick Zierden, Dax McCall, Gary Bailey and some others. Even though we're all 40-ish, we're still learning new tricks and pushing it. We just built a 24' mini with a spine in our private co-op warehouse.

How has skateboarding changed your life for the better?

As a young kid it gave me direction and focus, and taught me persistence and that dedication pays off. As a pro skater it taught me that you don't have to follow the lifestyle or job path that our society deems “normal”. I gave in for a few years and did the 9 to 5; suit and tie, but soon realized it was not for me. Now I own the Franklin Skate Shop and can set my own hours. We've got an indoor skate park in the works and hope to open next year. 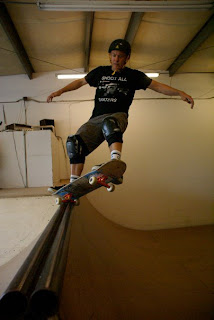 Donny Myhre standing up for skateboarding in TN. Photo by J.P. Robinson

Any thoughts on KONA?

I have so many great memories at Kona, so it's good to actually go there and skate it when I'm in Florida. That's where I met Danforth, Groholski, Buck, Cleo Coney, the Rancheros, and so many others. We'd go to Buck's place and go from the Jacuzzi to the pool when it was 35 degrees out. There's so much history from Jacksonville and Kona you could write a book about it.

Do you miss the Sensation Basin?

I used to miss it a lot. When they dozed it I think I might have shed a tear or two. We moved on and starting building ramps and skating the streets.

I remember you and your brother traveled down to St. Pete to skate Grigley's, what do you remember most about those days?

Other than skating the Bro Bowl and Grigley’s (hanging up on a b/s Ollie), I remember staying at Bruce Whiteside's and getting bit by a big roach in the middle of the night. Also, we used to go down and stay at Paul Schmitt's and package rails for him. We'd put in a couple extra screws or stickers to stoke the kids out. Then we'd short another rail package on the screws just to f*** with 'em...good times. 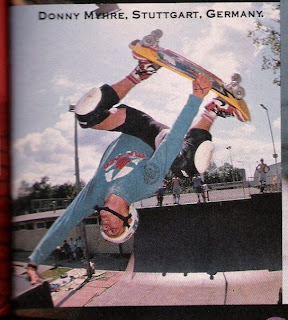 What do you have to say about old school versus new school?

I never quit skating so my skating slowly evolved to incorporate new school. I still do some flip tricks but on the same run I'll do an f/s rock or layback. To me there is no old school versus new school, just skating. The young kids today seem to respect the old schoolers. Boneless and no complies are the trendy “new” tricks these days...full circle huh?

When will we see you in the Bay Area again?

My brothers Sam and Mark used to live there but now they're both here in Franklin..hmm, maybe next summer? I'll be at the Surf Expo in January. If I make it to the Bay area I will definitely let you know.

Where do you see skateboarding headed?

More technical than it is...flipety and switch. And more tranny. I can't see them getting any bigger on the rails or stair sets. Kids will get burn out fast doing 15 stair sets. And maybe a little more underground. The parks aren't as “cool” as they used to be with the kids in my shop anyway. It's already kind of splintered into two mindsets: the more competitive, contest skaters and artsy, underground, “contests suck”, video skaters.

Any shout outs or thanks that you’d like to put out there?

Thanks to my wife Jessie for giving me two amazing kids and keeping me out of trouble. Thanks to my old friend's Scott Stanton, Monty Nolder and my brother Sam for pushing my skating over the years. Thanks to you for this Mag that keeps up old Florida skaters up to date! 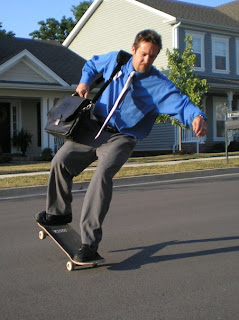 Skateboarding is all business for Donny these days.