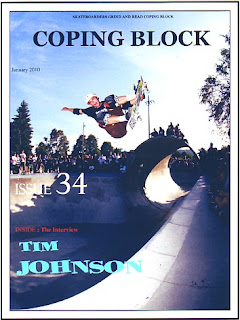 There’s nothing more exciting then watching live vertical skateboarding! Tim Johnson is the living definition of Gonzo! His runs will keep you on the edge of your seat, highlighted by his relentless mind blowing lines consisting of massive bio air variations, and blunt slide combinations that boggle the mind. To quote a bad guy from an old Bruce Lee movie, “his skills are extraordinary!” No ego here, just a down to earth Georgia/Florida soul that sips sweet tea and destroys coping.

Just when did you start skateboarding?

I’m from St. Mary’s Georgia, just across the border from Jacksonville, Florida. I have moved a bit between Jax, Daytona, and St. Augustine for a while too.

It doesn’t matter where I’ve seen you skate, KONA, Saint Augustine Skate Park, Cocoa Beach Skate Park, Stirling Skate Park in Dunedin, or Skate Park of Tampa, your willingness to go big over and over again really impresses! What is your energy source?

Friends, Heroes, Groms, a good session can get it going for anyone, but sometimes out of no where people feel like just busting some stuff out!

Which three skateboarders have influenced you the most and why?

I have so many influences it’s hard to pick 3. Out of the people I know well I would say Mike Peterson, Buck Smith and Benji Galloway. Dudes I grew up stoked on from videos and whatnot, I would say Danny Way, John Cardiel, and Pat Duffy. The whole Bacon Team and homies keep me influenced as well.

I don’t think you’ve ever seen a “Blunt Trick” variation that you didn’t like, when did you really start maximizing that trick?

I seemed to always skate with someone who had good blunt/nose blunt tricks that I couldn’t do, so I would get really hyped seeing that first hand and make myself learn them. Plus watching old Plan B videos.

Do you have a private ramp or bowl that you session regularly?

I have a ramp at my house. Currently it is 26 ft wide 5'9 w/ 7'9 trannys and extensions on both sides at 8ft tall. One ext has black granite coping my buddy Jason made for me. I’m currently moving another ramp there to plug into mine. Oh yea it’s all galvanized steel.

Is it ok if I call you the “Stale Fish General”?

Hahaha, um, I’ll have to check with the masters, although maybe through a corner.

How has skateboarding made a positive difference in your life?

Everyone needs something weather its a hobby, passion, or whatever. I was an outdoor kid/backyard ninja. I had to fill that void or I was heading for trouble. I took Karate for a long time and besides the physical aspect helping my skating, I get a sort of respect for what we do as well. It has helped me learn many trades from the people that I’ve met through it also.

When did you first get sponsored and who are your current sponsors?

My first sponsor was a little team out of Jacksonville called Legacy back in 99. We traveled around the southeast hitting up comps and jams just meeting people. After that I got some shop flow and Kona hooked me up with whatever I needed and I still ride for them today. I got some flow from DNA for a few years but they seemed interested in street dudes mainly. I started to get boards from another underground but known well in the area, called Crown Skateboards. That was around 02-03. They had a really good team with a few PROS already. Carl Neagele, Fred Reeves, Candy Hiler, and John Wilinski. They wound up turing me PRO just before a world cup event at Kona. I rode for them until late 06. I had a bad injury on my left knee in 06 and was out for 6 months during which I started riding for Bacon.  http://www.baconskateboards.com/  I currently ride for them, and every one of my teammates rips harder than anyone even knows!!!!! Every one of those guys can skate everything! I also ride for Ace trucks, Type-s Wheels, Kona Skate Park, 187 pads, and Soledad clothing.

Let’s talk Bacon, do you eat it as well as skate for it?

Oh yeah, I’ll take the last veggie burger and slap bacon on it even when there is plenty of beef ones left. Moooo hooooo hooooo hahahahahaha! (Evil laugh)

You’ve skated so many parks, and ramps, which ones have scared you?

If you could run skate contests like you prefer, what would you do differently?

Uh let me in them! Haha, nah, I don’t like having to do timed runs to get into a jam, that stuffs for the kids but I understand why. Some dudes get in there and play chase and block people from doing a good run, especially near the end of the comp. I don’t like skating in the same heat as open PRO Groms either. I’ve seen Chris Senn in the same heat as five PRO Open Groms, and they showed no respect, so he started mowing and I started cheering. Don’t get me wrong, the kids are freaking rad these days but I guess I’m just used to when I was coming up you were one or the other. We couldn’t just step in with the big guys who have paid their dues, and then go home and skate the local comp. Bottom line is the best thing about contest is the gathering. Fun parties after, during, and before the competitions. Seeing friends that live far away and getting to rip and hang with them. 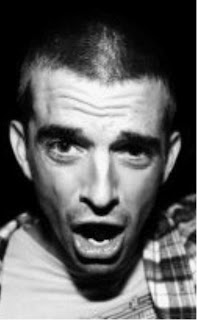 Who are the skaters that make up your current skate crew?

Well, I’m kind of a floater. I’m not in one place too much. I skate with Mike Barnes (darkness) a lot and on occasion I ride with the guys in JAX, like Jo Marrara, Mike Peterson George Evand, Mullen, Doug, then I get down in the Daytona area and ride with Darkness monster, Smitty, Storm, and Steve Workman (who grew up where I’m from in Georgia, he showed me how to skate vert. He still rips too, He learned 540s at the age of 36!

Have you ever felt like not entering a contest and just grabbing a bowl of cereal and watching cartoons?

I do that more than skate anyway!

Kona during a nightmare!

What’s the quickest way for a person interested in buying your skateboard, to purchase one?

Baconskateboards.com will have all of the info for ya.

How does your family feel about your involvement in skateboarding?

They support it. They are very proud of me no matter what. They don’t come watch me at comps because my mom can’t handle it. I scare her too much at home, let alone in some park with my homies getting me fired up, I’m a slammer and every session I’ll fly to flat from a bailed air in the deep end. My feet hate me, and my elbows look like Randy Coetour's ears!! So they just wait for me to come back with the stories.

What’s your favorite energy drink and or thirst quencher?

You spend time in both Georgia and Florida, which of the new Georgia Skate Parks do your really find fun to skate?

Not the one by my house that’s for sure!!! Pre fab crap!! Uh, the ATL area has some good ones I want to check out Columbus, my aunt lives there and the park looks sick!!!

Old shitty punk rock or southern rock baby!!! I get in the Metal or hip-hop mood sometimes depending on the session but regardless music is necessary.

Where was the coolest skate scene that you’ve experienced and why?

Charleston South Carolina has the best backyard scene, still going strong with the new and older generation. Portland is cool but there seems to be so much stuff to ride that it’s exhausting and almost unmotivating in a back ass way. The people there are rad though. Bondi Beach Australia! 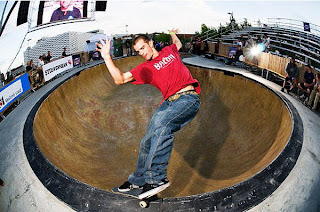 
What’s the skate scene like in Jacksonville outside of KONA?

Oh man there is a lot!!! Atlantic Beach has the Gridline Park, there is Johnny’s Bowl, Franks, Monument park, (new Team Pain Park) and for now the Skate Labs old ramp is still there, and the crew out there rented out the lot so some vert sessions have been going strong lately.

Do you own a Longboard?

It seems to have splintered into a few more categories than the earlier days, but I love the way everything has gone down. There are more people riding these days so that means more talent and more kooks/jocks also. All and all, I’m hyped on skateboarding.

You’ve been in quite a few skateboard contests, which one sticks out in your memory the most?

Wow, um my first PRO comp at Kona, Pro-Tec (just pick a year they were all good), and Bondi Beach Australia earlier this year was a big one. Plus, all the way back to the old mini ramp death matches in Clearwater, they were all good memories.

Do you stretch prior to skating?

Yeah, I have to now. I used to be super flexible while I was in karate, but now that I’m older it seems that I’m not flexible at all. Stretching after is just as important.

What new maneuvers are you practicing right now?

I just learned one-foot eggplants, maybe Ill try one to fakie. On mini I’ve been trying to get backside nose blunt to backside nollie flip out. Street, well finding a spot here is tough. Most of the rails I skate are in parks. The land is flat here, so that is why I think I took better to transition skating. Pool skating is a move on its own, just finding a line to get to a trick is a trick in itself.

Two different tricks, I need to get them back. I don’t think I’ve even spun one in 3 years.

All over the world, I want to travel as much as I can.

Any persons or companies you’d like to thank at this time?

My Girl Jen who has put up with my crap for eight years now, all of my sponsors, Jax homies, Charleston crew, Colin and Benji @ Bacon, Sergie Ventura, Buck Smith & Mike Peterson for being humble bad ass's, Ryan Young, Otis and Shannon, Hank Bering, Marty Ramos, Mike Rogers, My Family, Dave Duncan, and I’d like to say wuzzup? to the Scrotes, Gar Poe, my homie Billy, and everyone else on my spacebookface. I’m going to go play some call of duty now because it’s raining on New Years Eve!!!!