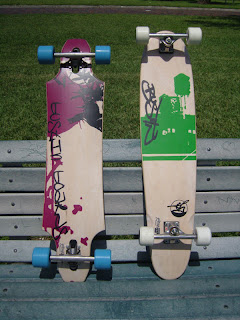 
Recently we received a package from Bustin Boards Co., a New York based grassroots company that gives you the opportunity to personalize each of your board purchases. What that means is that you select the board, you select the wheels, and you create your own graphic color combinations from the template provided by Bustin Boards right on their website! This is all really cool stuff, but they also promote “Push Culture” events in and around New York that generate huge crowds of Longboarders, which helps to promote not only Bustin Boards but Skateboarding to the general public. 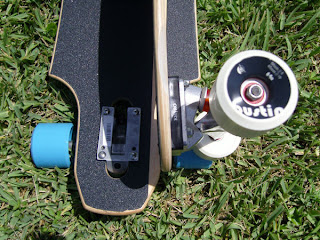 Mike Dallas of Bustin Boards sent us a Cigar deck and a Maestro deck. The Maestro was fitted with Randal 180 Trucks, and 70mm Bustin Wheels. The Cigar was fitted with Tracker Darts and 70mm Bustin Wheels.  The Bustin Maestro is a drop through truck design deck with wheel cut outs. It has a slight upturned nose and tail, which provide plenty of solid footing with the Bustin Grip tape protecting against slip. This board was very comfortable at cruising speeds down paved Florida trails with ten to fifteen percent grades, which are fun and quick for a flat state like Florida. This set up was very responsive and sure in it’s flow and feel under foot. If you are over two hundred and ten pounds like myself, you might find this board to be a little too flexible under heavy torque. I would love this same design on a deck a little longer and maybe with one more laminate. (Maybe I should just loose this belly) LOL! But a great skateboard overall! I might add that this deck caused a lot of head turning with the bright blue Bustin Wheels hugging hot asphalt at will. 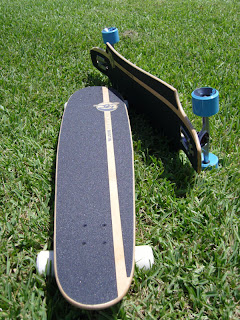 Next deck to be tested was the Bustin Cigar, which had Tracker Trucks and White 70mm Bustin Wheels on it. This deck has a slight rise up beginning behind the front trucks and ending about half way down the deck surface. The Cigar truck placement in the front is a snub nose configuration, which helps this classic design to turn quicker. The Cigar also has a narrow but slight kick tail in the rear, which can quickly be utilized to negotiate curbs during city cruising. The Cigar does not demonstrate as much flex in the laminates as there was in the Maestro, but there’s plenty enough to generate pump and S-Carving along the trails without putting your foot down for some distance. Perhaps this is the exercise I need to perform frequently to reduce my Root Beer belly! While there are several Longboard companies on the market to select your next purchase from, none will personalize your purchase like Bustin Boards with their graphic color options or make quality boards as affordable. If you like riding as much as we do at Coping Block Skateboarding Magazine, then adding a Bustin Board to your quiver of decks is a good idea. 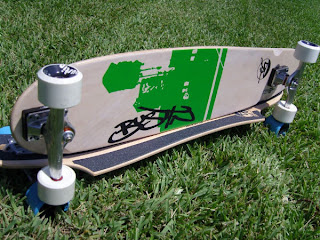 When testing these skateboards we pushed them through the congested streets of three bay area cities, along smoothly paved Florida trails, and down small hills at very rapid decent speeds and we switched boards all along the way. After all, that’s what these laminated creations were designed to do. It’s all about the “Push Culture”, isn’t it time you got on board with Coping Block Skateboarding Magazine?