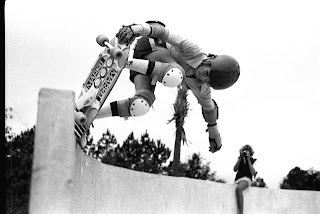 Kelly first let me thank you for taking the time to speak with Coping Block, it’s a real honor to get to interview you.

Thanks, it's an honor to be interviewed.

Skateboarding in Florida owes quite a bit to you for putting us on the skate map. Your name has always been associated with speed, style, flow, and also being on the forefront of innovation. When did you pick up your first skateboard, and how quickly did you progress?

I think I was probably around 8 or 9 years old when I first got interested in skateboarding. Typical story, I didn't have a board so I cut an old roller-skate in half and mounted the trucks with wood screws to a rectangular piece of plywood. I remember the screws being a bit too long and sticking up through the top of the board, it kind of sucked considering I was skating barefoot at the time. It had metal wheels too, if you got going really fast and did a power slide you could get a few sparks to fly off the back wheels. I was surfing a lot too at that time but I got more satisfaction and enjoyment from skating, it came very naturally for me. I started experimenting and making my own plywood decks and building ramps in our driveway on the weekends. In 1976 Skateboard City opened up about 15 minutes from my house and I started entering their weekend contests and really got motivated. That's when I started taking it a bit more seriously and things started to take off. 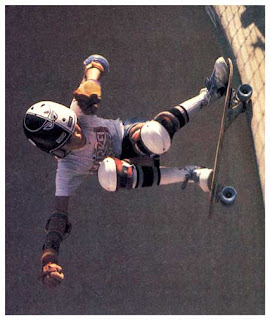 There was a time in Florida skateboarding history, when if Kelly Lynn showed up to skate, some skaters didn’t want to compete against you. You had several first place showings in skate contests from Florida to the Carolina’s, do you still have those trophies?

I have every trophy I ever won. There was very little money in skate contests back then so the trophies meant a lot. There is a lot more to skating than just contests but everyone likes to be recognized for their efforts, to me they're a symbol of accomplishment and respect. 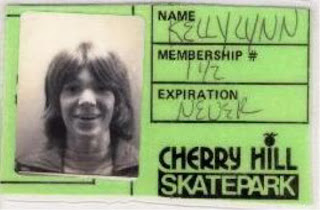 Tell us how you first got sponsored, and then who were your sponsors over the years?

Nichols Surf Shop was my first sponsor, I was skating a lot with the older guys who hung out at the surf shop and they asked me to join the team. There were several different local surf/skate shop sponsors that followed. Some of my sponsors over the next few years were NHS (Santa Cruz & Park Rider), Markel Skateboards, Gullwing Trucks, Gordon & Smith and ACS Trucks.

Where was your home park, or ramp in the early years, and who were the other skaters in your local skate scene?

Skateboard City was my first home park. When it opened there was nothing else like it anywhere so there was a pretty big scene going on. Over the next year or two Moon Forest Skate park in Ormond opened and became a regular spot as well as Oaks Pool in Daytona Beach. The sessions at Oaks were epic, it was deep, rough, kinked, ugly and we loved it. Locally I skated mainly with Clyde Rodgers, Seadog, Charlie Gonzales, Bobby Mandarino, Matt Dresser, Dave & Jeanie Narducci, Ben Duffet, John Wade, Tim Nolan
and many others.

How often did you surf back in the day?

My brother Fred got me into surfing first before I started skating; we surfed every weekend we could get to the beach. I'm glad it happened in that order it just seemed right, it's where I first started to develop a sense of style. Once I started skating it kind of took over my life, I still surfed but nowhere near as much as I skated. For me personally surfing is the heart and soul of pool, park & bowl riding.

Of all the Skate Parks you competed in, which one was your favorite to skate?

As weird as Moon forest was it really was way ahead of its time, I had a lot of fun there. Sensation Basin in Gainesville was the ultimate proving ground in Florida those days and was definitely the gnarliest and most fun at the same time.

The first time I met you was during a contest at Clearwater Skate Park, you were riding so fast and so smooth on the extensions, that you made it look easy and obtainable. Everybody in my skate crew was really impressed! Who was your major competition during those days?

Clyde and I were always battling it out and pushing each other. Shawn Peddie was always a threat as well as Alan Gelfand, Mark Lake, Jim McCall, Steve Fisher, Steve Anderson, Ed Womble, GBMII, and I'm sure I'm forgetting a few. 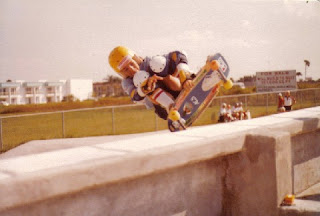 
You disappeared from the skate scene for a while, were you surfing a lot in those days?

I wasn't sponsored or competing during the eighties and most of the parks had closed down so naturally I got more into surfing. We had a big half pipe in the woods that we built and skated but it was pretty underground and just for fun. In 1991 I started getting heavily into snowboarding was going on several trips a year, that's something I really love and hope to continue doing the rest of my life.

What keeps you skating these days, and motivates Kelly Lynn to go out and rip up a pool?

Even at the age of 44 I still get excited about learning something new or coming up with a new twist on something, that's a huge part of it. It's also such a healthy release of aggression; it keeps me sane for sure. But I think the main reason is it's just a lot fun, nothing better than a good pool session with your buddies. 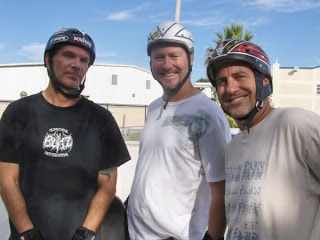 When did “Soul Trip” get created and who are all the players in that effort?

Chuck Dinkins, Bruce Walker & Clay King originally started Soul Trip back in 1992. A few years back Chuck; Bruce and Clay decided it was time to revive Soul Trip. They soon brought me in as a partner, artist and team member. In recent years Clay has bowed out to pursue his dental lab practice and Reggie Barnes has come in as a fourth partner. Our pro rider Falco Baltys is representing us out west in California.

Your graphics “Man’ s Ruin” are the bomb of course, how did you come up with that concept? 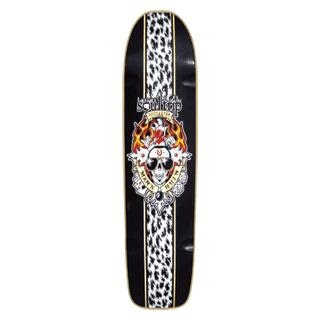 I didn't, the concept has been around for a longtime. As far as I know it was originally an old school Sailor Jerry tattoo design. I've seen a lot of different versions of the "Man's Ruin" concept over the years and always liked it. I couldn't resist doing my own version of it.

Who are your favorite Florida skaters, and whom do you session with these days?

There are a lot of major influences in Florida. I gotta say watching Buck Smith skate motivates me so much; I still want to have that much explosive energy someday. The same goes for Tim Johnson. Todd Johnson’ s style and speed is amazing. Craig Dupree and Bob Harkness are naturals and two of Florida's most underrated skaters. Mike Rogers for determination and endurance, love those 2-minute runs. New Smyrna's Garr Poe is going stronger and stronger at the age of 47, that's pretty impressive to me. Chuck Dinkins for style, speed, and pure unpredictability. A session with “Rude Boy” and son is always motivational and just plain classic. Tony Misiano, Mike Duncan, Mactus, Tim Larsen, Mike Barnes, Smitty, Tito, Big Tony, all of the central Florida crew are a blast to skate with.

You now have a new home Skate Park to shred! Please tell us what you went through to get that Skate Park done. When should a crew of us central west coast skaters come session with you?

It's a VERY long story, and about 6 years in the making. I would just say don't give up and it will eventually happen, we almost gave up a couple times and now I'm really glad we didn't. Get to know your city council members and develop some allies in your city government. Accept the fact that most city officials won't truly understand what they are building and how important it is until after it's completed. Once they see the final product in use, it will sink in just how important skate parks are. We got absolutely nowhere for many years until we finally secured the funds by applying for a Volusia County ECHO grant. Once the money was there everything else fell into place. Danny Young was the major force behind applying for our grant, without his tenacity and persistence our park would not exist today. In the end our city government eventually came around by providing the matching funds necessary to apply for our grant and also funding the remaining portion of the skate park construction. The entire crew from Team Pain went above and beyond anything we could have hoped for; no other skate park builder could have matched their efforts and contributed so much. We also owe a HUGE debt to Tony Misiano who was the general contractor on the New Smyrna Beach Skate Park. Tony took a pretty big hit on that job I'm sure, just like the rest of us who volunteered time and services our main concern was just getting a quality concrete skate park built that would ignite the skate scene in our hometown. As far as when you should come skate... the welcome mat is always out, the park is free and open everyday until dark. Let's make it happen soon!

What’s in the skate future for one of Florida’ s brightest skateboarding talents?

Look for big things from Soul Trip! We have a new Falco deck out currently and a new surf inspired Reggie Barnes model coming out soon that will turn some heads. My new model will come out this year as well with an 8.5" modernized shape and new graphics. Also look for some skateboard related home furnishings to come out from a personal project I'm working on called "Retro Fiend". Pool skating is something I will never get out of my system or stop doing and I'm really having a blast continuing to enter banked slalom events every year in Albuquerque. Banked Slalom is kind of underground and a lot more difficult than most people realize, and I like that about it. A full speed mile long run down Indian School Ditch in New Mexico will change your life forever.

Do you have any shout outs, thanks, or messages for anyone?