Reprinted from Coping Block Skateboarding Magazine 2009 Volume 1 Issue #2 The Mike Frazier Chat was the very first interview in Coping Block! If you missed this one and you probable did, here it is for your reading pleasure. 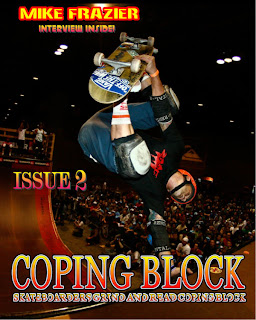 Aged but not old, tested but not tired, torn but rebuilt, this man machine continues to blow minds every time he skates! His office sits six feet above the coping; his work is often switched as he re-enters the skating surface backwards.
A die-hard, a journeyman, gnarly, dedicated and focused are just some of the words that could be utilized to describe this phenomenon on a skateboard.

Mike Frazier hits Stirling Skate Park every now and then with his son. Along the lip of the bowl at Stirling skateboard park sit dozens of younger skaters, their eyes fixed on the ever changing body movements, while ears are tuned into axles grinding on coping all the while contemplating the cat like quickness of Mike Frazier’s Maneuvers.
Sometimes you can’t believe your own eyes; did he just do what I think he did? Yeah, and at speed, backwards! 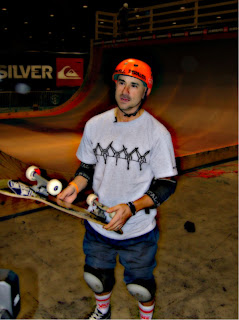 Mike Frazier during a television interview at the Orlando Surf Expo.

I was able to chat with Mike about where he’s been and where he’s headed in the skateboard arena.

So how long have you’ve been skating Mike?

Where and when did you first start skateboarding?

Cruising the streets of Clearwater, and then one day I saw these guys with full skate pads on, and I asked them where they were coming from. They said a ramp; well two years later I found that ramp and started skating it. It was Chuck’s ramp.

You’ve skated for quite a few sponsors, whom was your first?

A local surf and skate shop, and then Zorlac, Mertz told me to send a video in and I got hooked up for three years. After I placed 1st, 2nd, and 1st in the Am series against Mike Crum, Danny Way, and others I went to Canada with Bill Weir who got me to quit Zorlac and hook up with Powell.

So how long did you skate for Powell?

Whom else did you skate for? 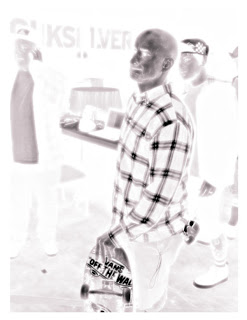 Did you go into hibernation after vert skating went down?

I never stopped skating for twenty – two years except for injuries. When vert skating went down, I still skated four or five days per week. 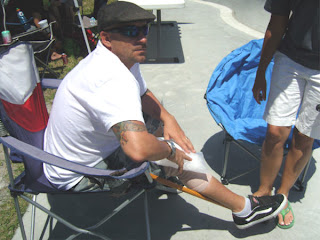 What kind of injuries did you have?

Well, right now I’m recovering from two biceps tears, a collarbone separation and a re-injured rotator cuff that I originally hurt at Woodward skateboard summer camp.
I had two surgeries to fix that stuff and then I was in a car accident and re-injured the rotator cuff. I’m not even supposed to be skating right now. I know all the rehabilitation exercises, and strengthening with bands, weights and stretches. I have about two more months of rest to go, so I’m taking it easy. 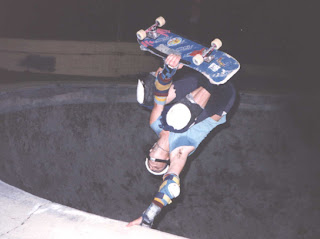 Any advice you want to give the younger skaters?

Skate for fun, not for the fame, skate because you like it. If it’s your life, then you’re in it for the right reasons.

If you missed the 80’s All Day event at the Surf Expo in Orlando, then you missed Mike Frazier put on a clinic that had Tony Hawk standing with his mouth open. Frazier is healed and ripping! 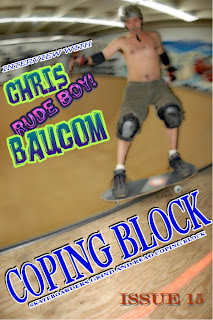 Chris, thank you for your support and taking the time to answer a few questions for Coping Block Skateboarding Magazine.  Chris you have left your footprint deep in the trail of Florida Skateboarding History, when did it all begin for you, and what drew you to the sport?

Seems like you have always been on a faster learning curve then your contemporaries, whom influenced you the most when you were just a young up and coming skater? 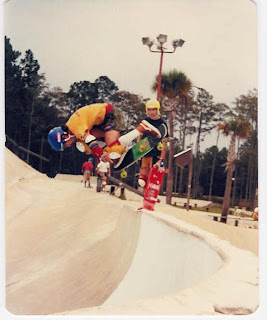 You’ve always ridden your skateboard solid, your style straightforward and focused.
What is at the core of your emotions while attacking the lip with your array of tricks?

What the hell does straightforward and focused mean? Was I supposed to not pay attention? SORRY-Kidding. I always just had fun; learning stuff always kept skating new for me.

I believe the first time I saw you skate was at the Sensation Basin Skate Park in Gainesville Florida.  You were floating backside ollies in the pool-bowl, working on your line and I remember thinking to myself, “that guys rad!” What tricks did you perfect at the Sensation Basin?
Everything I could ever do, I could do there, not sure I perfected anything though. The girls were awesome! (One of them became my wife for twenty-one years). 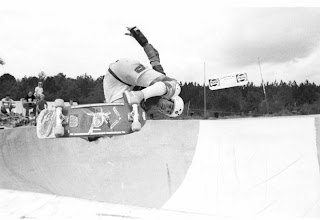 Chris Baucom floating a backside ollie during the Pepsi Challenge.

Many skaters don’t realize it, but you invented some skate tricks that are out there today, what are some of the tricks you developed?

Ollie to tail and Ollie to grinder things, lip trick stuff, invert varials to tail, a front side foot plant with the wrong foot, I don’t know. There is a picture in an old Bones Brigade newsletter of a Front side air Foot plant. A lot of guys threw down some cool stuff at the Basin. Stacy Peralta wrote in a Brigade newsletter, that I was doing front and back ollies to tail before he saw anyone else doing them. 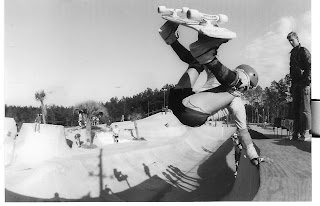 Chris lifts a high lay-back air on the massive vertical walls of the Basin.

When did you first get sponsored and how many have you’ve had over the years?

I was twelve and skated for Bill Murray at Inland Surf, then the Basin, Powell, Walker and Independent continues to flow.

When did you turn PRO and what was your first PRO event?

It was either the Pomona Pipe and Pool event in 1982 when I tied for ninth with Micke Alba, or the first Saint Pete contest, where I placed first.

I saw a picture of you and your son doing skate doubles together and grinding the same coping. I was stoked! What’s it like for you to see your son ripping it up on a skateboard?

He’s getting nasty, does lip-slide entries, front side slide and rolls, big ollies, really long front side tail slides, he kicks my ass. 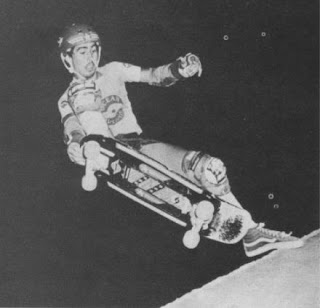 You used to have a pretty long list of shall we say, “ Chris Baucom Antics” that earned you the title “Rude Boy”. But is that really how you got that name?

Yeah. I was punk, but a lot of the stories are just shit. I saw an interview of Chris Miller where he said he saw me throw a TV in a pool..never happened..some funny (mostly harmless) stuff went down. But you can’t believe everything. Ok, maybe it did go in. How has becoming a father changed you as an individual?

I assume the same as most. All of a sudden you have others depending on you, can’t be an idiot anymore. I had to grow up fast. I couldn’t be any happier with the way both my kids have turned out. Daughters almost twenty and the boy is eighteen, never any trouble, both in college, both got academic scholarships, good people.

I remember standing on the lip of the half-pipe during a contest at KONA, and hearing the California guys asking each other whom you were. They were as impressed then as people are today who witness your skating. How often are you able to get on your board today?

Once or twice a week, but I’m sure no one’s impressed. 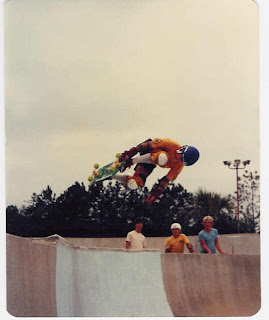 A young Chris Baucom gets some air as an even younger Rodney Mullen's looks on.


Are you going to continue to skate in the “Masters” events around the state?

I got first in my last one at the SPOT. I’m done.
When I get a chance to skate with my old friends I don’t want to have to think about learning a line or skating when it’s my turn or at a certain time. I just think contests SUCK! How about just a party? Skate all weekend whenever you want?

What’s in the skateboarding future of a famous shredder like Chris Baucom?

Skating with my boy and my friends as long as I can. 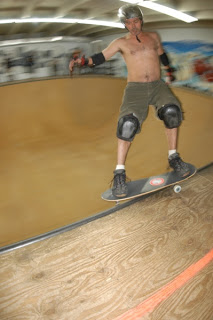 Any last remarks to those persons that helped you become whom you are today, or to the young skaters out there reading this?

Thanks for all the good times to all those that sessioned with me throughout the years.
God Bless.