The Surf Expo and fun at the All 80's Day Vert Challenge!

There are two Surf Expo's per year in Orlando Florida, get to one of them!
January's is the biggest, followed by one in September, they are both the place to be to get inside of what's really happening and what's up and coming in the Surf, Skate, Resort, and Beach Wear industries. 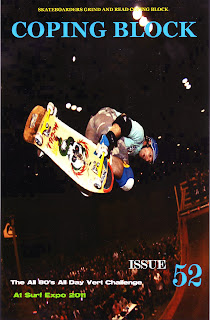 Anticipation of the “Surf Expo” and Friday’s “All 80’s All Day” vert challenge hosted by Quicksilver, had my adrenaline pumped up at a high level all week. With some of my favorite skaters set to appear and skate, my mind was racing, it had been years since I was able to see all of them skate together, and in one place! 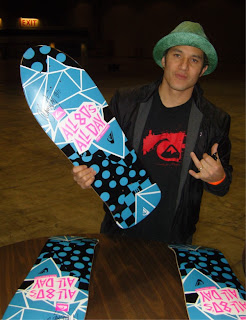 Christian Hosoi at the Expo


Just before it was time to leave, I opted to leave my skate stuff because I had been told earlier that it was invite only.  Bummer.  It’s going to be tough to watch everybody blazing and not want to get in on the ramp session as well. 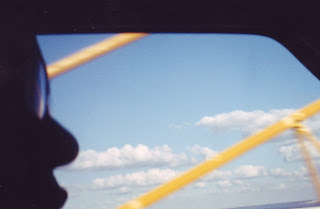 This trip to Orlando wouldn’t be as spacious or as comfortable as previous ones due to a blown head gasket in my five series, “Bust My Wallet”. So, alternative transportation had to be acquired. With a little bargaining, I was able to borrow my dad’s little Isuzu fishing truck and headed over to Orlando for the festivities.   Interstate four was relatively spacious and opening up that little four cylinder engine was smooth and silky, however it’s lack of torque allowed me to pleasurably view the many side profiles of various automobiles as they sped past my green single cab pickup truck like I was in reverse.  No big deal, I was going to see some of the world’s best skateboarders ever, and it didn’t matter to me how I got there, as long as I got there.

During the drive east a long time friend and fellow skater by the name of “Bill Procko” phoned me to let me know he too would be there to take in the festivities and skate history with his family. He reminded me that due to our current ages that a much less stressful and safer skate routine would be necessary if we had been allowed to skate. A routine that would fill up the time allotted with nothing but fakies, and kick-turns, followed by a knee slide that would require emergency treatment on one of Barry Z’s stretchers behind the ramp.  Ice! Somebody get these guys Ice! (LOL!) 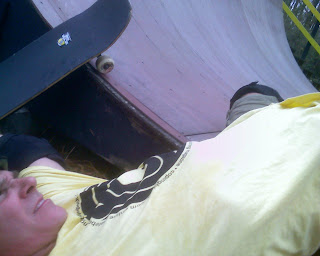 Well, I like to look up to Mark Lake who is still ripping into his fifties as inspiration! I’m not even fifty yet and I may not be able to pull off all of my old tricks consistently, but I have thrown down a few extended and contorted inverted maneuvers recently, followed by two days of stretching and..ice on my lower back, lots of ice.

Once I reached Orlando it was time to check into my room and get my grub on. These are the days of living below one’s means and saving money, so the Econo Lodges $44.99 rooms right on International drive fit the bill well. When you combine its great location with the Surf Expo’s free executive bus rides to the convention center, I had enough money left over in my daily budget for a sandwich and a glass of water! Yes! These are hard times, so give me a break. I found a cheap buffet and got busy. 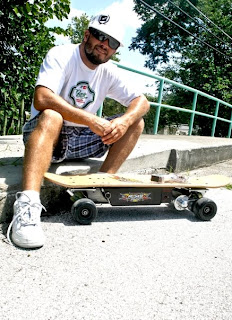 Upon arriving at the convention center you could immediately see and feel the difference from previous Expo’s. This years Surf Expo was huge! More exhibitors, more buyers, more bikinis then I ever remember all under one roof, this is good, really good, and in fact it’s great. As usual, I make my rounds to see who’s in the house, and introduce my publication to as many new faces as possible. Plus get a few interviews with the exhibitors. Thank you Jerome and Amanda of EMAD electric skateboards! I’m also simultaneously scanning the scene for Tim Payne (The Ramp Builder) so I can find my way back to the vert ramp where my homies from back in the day are practicing. You see the vert ramp is separated by the world’s largest folding partition, and all doors are locked from the side that I’m on.  I look over my shoulder to see Andy MacDonald and crew looking for an entrance as well.  I join in with their search party and our caravan finally gets the correct information and directions to a far side entrance requiring us to exit the building. 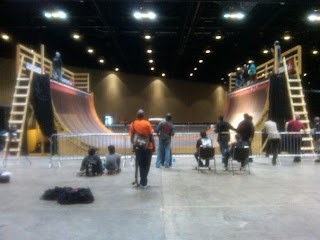 The QuickSilver Ramp during practice sessions.

We travel along the outside of the building to where a door is propped open with a chair. Sitting in the middle of over 200,000 square feet of space is the Quicksilver Ramp and tour bus. Off to the right side of the ramp there are some familiar faces from past skate sessions.  Mike McGill, Bob Umbel, Christian Hosoi, Mike Frazier, Mark Lake, Kevin Staab, Donny Griffin, Todd Johnson, Buck Smith, Barry Z, Chuck Dinkins, Henry G., Jeff Hedges, and the crew from the S.P.O.T., Brian Schaefer, and Ryan Clements. Brian and Ryan were also this events MC’s. A few moments later Steve Steadham walks up with Morgan Monroe of the “Hollywood Summit Show”. I kept thinking that Monty Nolder and Steve Caballero really should have been here too. I emailed Rob Mertz earlier in the week and he was injured and couldn’t make it. But there were enough talented skaters here to put on a really awesome display of skateboarding. A film crew was posted up near the rear of the ramp capturing some skating and recording interviews with the ambassadors of our sport. I quickly snap some images of the interviews in progress and then catch up with old friends. It’s always good to see that everyone is healthy and that they too have little belly growth. 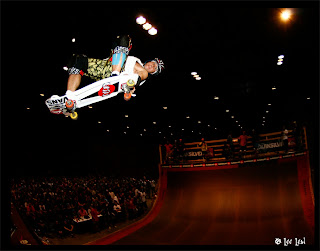 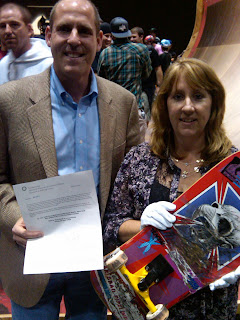 Represenatives from the Smithsonian Institute

Quicksilver needs to be commended for putting together such a memorable event, which was fun, exciting, and historic! Representatives of the Smithsonian Institution were in the house to gather Skateboarding artifacts to put on display, including the 1980’s Tony Hawk Skateboard Model ridden by Tony in the event, and to seek the helmet and skateboard from Mike McGill that he wore the day he invented the McTwist.  The influence skateboarding has had on American culture is astounding! It’s about time skateboarding got some recognition, first it was the California African American Museums Exhibit “How We Roll”, and now the Smithsonian is gathering skateboarding artifacts. Nice! 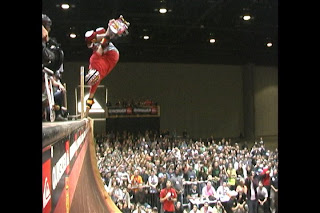 A little while later Tony Hawk makes his presence known on the ramp. I stopped counting different wall-to-wall tricks after fifteen during one of his runs. Watching these guys skate brought back so many memories of skate sessions past. Mike McGill’s maneuvers were just as I remember them back during those super hot skate sessions on muggy Florida afternoons on John Grigley’s half-pipe, just higher and more powerful. Frazier ripped the ramp like he was riding a mini ramp inside of Astro Skate in New Port Richey.  You could tell that many of the skaters were having to make adjustments in their riding style to match the small nose shapes of the eighties skateboards that they were riding. Buck Smith was a prime example of this as he did front side disasters at speed and had to shuffle his front foot back behind the front truck quickly to compensate for the lack of a nose on his old eighties model. 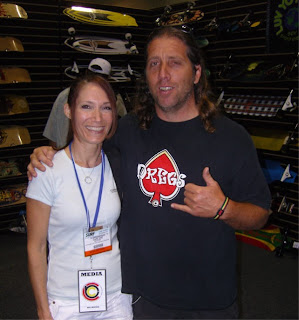 
Later on, when the walls separating the two massive rooms were rolled back, you could see the massive hordes of eager spectators awaiting entrance. Once the ok had been given to enter, the ocean of rabid skate fans bum rushed and spilled through the entrance like water flowing through a broken damn and engulfed the area surrounding the ramp. You could feel the energy building as skaters continued to warm up and please the crowd with high airs and mind numbing lip tricks at speed.  Because this was a salute to eighties skateboarding, it was like going back in time, the clothing, the skateboards, the ramp, the music, and even Christian Hosoi’s hair were all eighties based. This is how I remember my early days in skateboarding competitions and backyard skate sessions. While standing next to the ramp I imagined the weight coming off my body and my hair growing on top of my head to form a high fade flat-top haircut right there and then.  Alas, my late night French fry belly, glasses, and fat face make me look a lot like a certain American Idol judge, and that’s not a good thing! 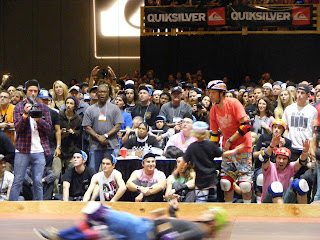 Kevin Staab slams as the crowd looks on.

Once the official event kicked off the skating was just explosive!
Mike Frazier is no joke! Officials are still going over some of his maneuvers in super slow mo to try and determined exactly what he was doing. Was it a switch varial flip one footed cess smith grind disaster to tail wrap backwards, or an illusion? Who knows, it was just sick!  Christian Hosoi could play patty cake and make it look cool, he is the style master and the crowd loved ever second of his skating. He satisfied all with his “Rocket Air”. Kevin Staab must pull the highest backside ollies of all time. They look like they’re lighter than air and his blunted re-entries into the ramp were awesome!

Carabeth-Burnside drilled some lofty frontside airs that got the ladies in the crowd hyped up. This is what skateboarding needs more of, vertical skateboarding on display in places that don’t get to witness the intensity and skill of these veteran skateboarders. I was listening in on the conversations of various street skaters talking about how stoked they were, and how they didn’t expect vertical ramp riding to be so exciting and fun to watch live. There’s going to be a whole new breed of vertical skateboarders in Orlando and Quicksilver can take credit for planting the seeds.

Jeff Hedges dealt invert variations like cards, Mark Lake pulled Lake Flips at will, and the eventual winner Tony Hawk toyed with the ramp and the crowd, going through an endless bag of old school tricks like fakie ollie foot plants that confused the new school skaters. They never saw one. I like that.

Bryan Schaefer and Ryan Clements passed out hundred dollar bills to skaters that pulled off requested old school tricks and that hyped the crowd up even more! Mike McGill pulled an Elguerio to the satisfaction of many old school skaters and snagged another hundred-dollar bill for himself. Cool.  This has been a great day, and I’m thankful for that little green truck that could and did get me from the beaches of the Gulf to the land of Disney safely to be able to witness this historic day of skateboarding.

Orlando’s Surf Expo is an event and if you’ve never been to one, well it’s time to plan for the next one in September. There’s no guarantee that there will be vertical skateboarding on display, but it’s well worth the trip to be apart of the industry’s biggest gathering of Surf, Skate, Skim, Ski, BeachWears, and the Bikinis aren’t bad either.