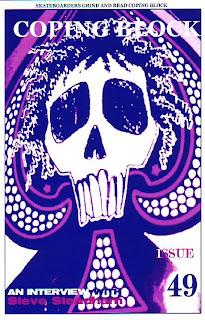 Where are you original from?

Steve what attracted you to Skateboarding?

I was a wrestler in High School and it was like a hobby per say and transportation at that time. 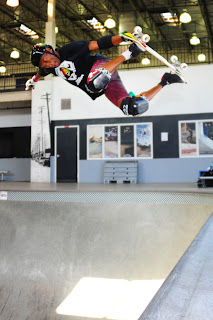 What was your first set up?

It was some plastic Cadillac board with grip tape that was molded plastic. It was yellow and had ball bearings. Lol, I loved that board. 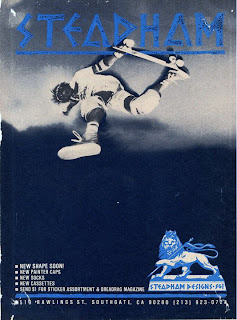 Every skater from our era had a dream set up, what was yours?

Well mine was a Brad Bowman Sims board, with Independents and Sims wheels. That was the sickest team back then. Bowman had the most insane style!

Did you have a local skate park or a backyard ramp scene when you started riding?

Yes, “High Roller”, and also “Desert Surf”, Lol. We had a cool backyard pool called “Shotgun”. The owner Rocky was this cool dude that when we first jumped his fence he came out with a shotgun, then he was like, “oh yeah, you guys can come skate my pool all the time”. We skated there a lot. Steve during his Powell Team days.

Who were the other skaters in your original skate crew?

Did you get to session all of the historic skate parks in California, or are there a couple that you missed skating?

I missed a lot of them actually, but of the parks I skated Upland was my favorite, but Whittier Skate park was the best. Then there was Marina Del Rey, and I skated Colton too.

What skate park (past or present) stands out in your mind as the best ever and why?

Whittier cause it had the best pools, and the locals where sick! Lance Mountain, Neil Blender, Lester Kasai, John Lucero and others! 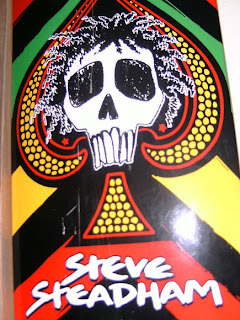 Which skaters influenced you the most?

I think Brad Bowman, then Steve Caballero and Steve Alba.

How did your family react to your involvement in Skateboarding, were they down?

Yes, my father really supported my trips to California. Without his support, I never would have made it to Cali even once to skate. My friend Frank Kocyba took me to Marina Del Rey also. He was really nice to me, and of course Jesus Christ.

Where has skateboarding taking you around the globe?

So far I’ve been to Australia, Canada, Puerto Rico, Hawaii, and Mexico. I’m going to go to Japan, England and Egypt in 2011. 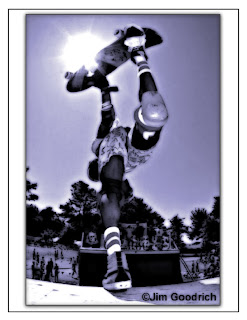 If you could pick any three skaters for a private session who would they be?

When did you start getting into the music scene and how often do you perform live?

I got into music more in the late 90’s when I was slowing down on skateboarding. I traveled a ton, and I still play but not as much. I have been focusing on my shoe company Urban Footwear and my Skate Team. I have Josh Rodriquez, Mike Brookman, Robert Lopez, Brandon Read and Bryan Chiinnea on my team currently. I’m stoked! 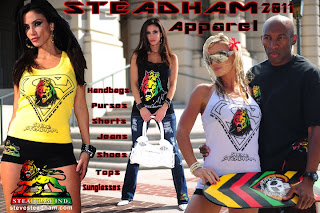 What bands do you feel have influenced you musically, and which do you like to skate to?

Have you ever jammed with Chuck Treece?

Not really, But he came to my house along time ago and basically lit my drums on fire cause he was sooo good. I like left the room cause he knew every song part to the band Genesis. Lol, he is a great musician.

How much vert do you prefer when you skate a pool?

A lot! I want to build a pool that’s 13 ft with 2.5 ft of vert. or something close. Big tranny and some real vert! 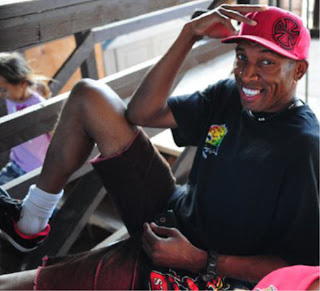 Where do you skate regularly?

Street skating has enabled and motivated skaters around the world, because they don’t have to have this perfect skate park to learn. I admire it, I think those guys are insane cause they don’t use pads and do 12 set handrails. Yes, I’d say vert is on the rise again and most skate parks have tranny, which is more on the rise than vert. Their building smaller things recently like 8 ft.

Longboarding is the fastest growing segment of skateboarding today, is your company producing a Longboard as well? 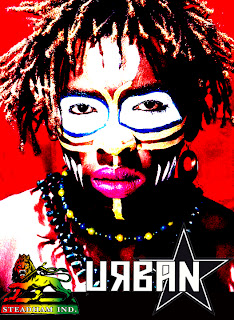 You had some rad spinner wheels in white that were so sick, are you still producing those?

Well, Mike Miller makes a great wheel. He is still doing them and I’m planning on working with him soon. He really helped me during the Vans Warped tour and also with my productions. So I owe him dearly right now.

Does your skate model come in multiple sizes?

Not the re-issue from Powell. I’m trying to get them to do the shape they personally make for me. No luck yet, Lol. My company makes street decks with my graphics on them though.

Tell the Coping Block readers both of your companies website addresses, so they can check out your cool stuff! 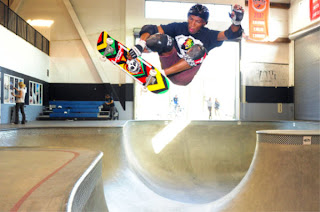 Steve Steadham flying frontside in the air above the Combi Pool.

Do you have a certain diet that you follow to maximize your ability to skate frequently?

No not at all. I try to eat but not enough, Lol!

Steve do you miss the days of big skate teams and team competition?

Yes I do. It seemed to be so powerful then, it’s coming back.

Do you think there are enough contests for us older skaters? 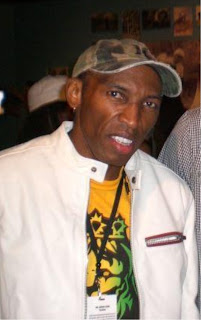 Steve appearing at the C.A.A.M Event.

When people think of your skating Steve, they frequently talk of your monster board slides or high - speed lines in pools, what would you say about your skating that doesn’t get mentioned?

Well, hmmm? I don’t know, I like speed and I’m happy with that if that’s what they say. I love front side Inverts but I’m on a mission to pick up some tricks for 2011. I really feel I can skate better than I ever have. 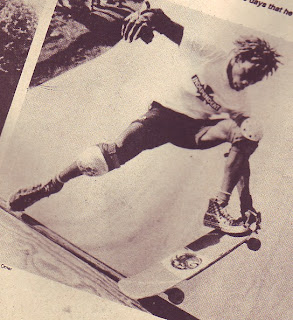 What’s your opinion of the “X-Games”?

I like it and think is good for skateboarding to be in the main stream. The Legends of Vert is the coolest though, Lol… Wooo hooo!

What would a Steve Steadham Skateboarding TV show be like?

Well its gonna be funny and off the wall. Music, interviews, traveling, making dreams of skaters come true, and absolute mayhem. 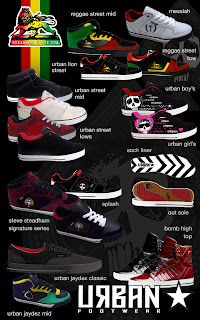 Do any of your children skate?

Yes, all three skate! Jayde –12, Alexxis-10, and Atasia- 8. I love them so much and it’s the best feeling when they ask me when were going skating again.

What are your skate plans for the future?

Just to produce more events on a bigger scale, do them better. Skate way better. Try to get on Chris Millers level, love my daughters and people that are close to me more, Love my enemies too, and build my brands into successful entities. Love Jesus Christ.

When are you coming back out east?

Any thanks or shout outs at this time?

Stacy Peralta and Steve Caballero.
Steve signed my board at the Upland contest when I was afraid to ask him and that made me so energized that I became good. Thanks Cab! I love ya man!

Thanks for taking the time to chat with Coping Block, see you at the EXPO!

Yes, no problem, thanks for having me. Peace 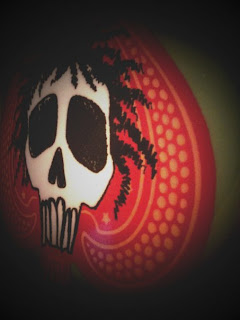