The 2010 Skateboard Hall Of Fame in Coping Block! 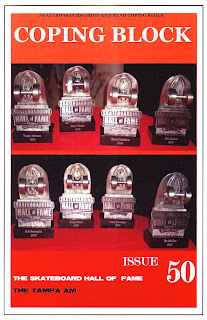 There was a gathering that took place on the final hours of the first Saturday of the last month of the year, affectionately known as 2010.  Now with a global economy in turmoil and power being shifted, eliminated or secured by political parties, could there ever been anything more from the fray than the celebrating of true icons of this nation?  I give you the CLASS of 2010 Skateboarding Hall of Fame Ceremony, held at the very historic COOPER DESIGN SPACE in downtown L.A. The COOPER DESIGN SPACE is known for attracting some of the west coast’s top creative talent, and on this special evening Skate talent would be the theme. 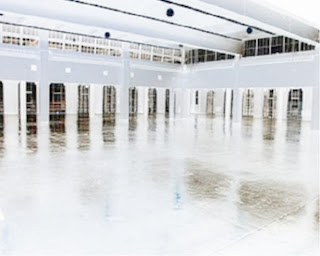 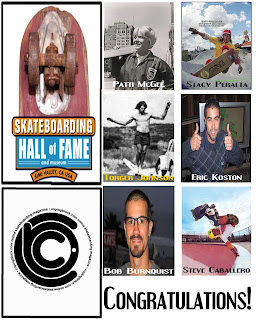 With Emcees Lance Mountain and Steve Berra handling the intros and generational historical, the enchanting yet ruckus evening began on the top floor of one of hippest buildings in all of LA.   Food and cocktails were served.  An industry auction that was filled with some of the most unique skate-related items in the history of skateboarding.

Some of the speech highlights

A Nose Wheeling Torger
Torger Johnson (died in 1983 in car accident in Hawaii) known for his style and early influences in the 60’s.  Those who saw photos or early day footage know he epitomized the look of skateboarding as well as the dedication to progressing the sport.  He was the first skater in a National commercial FROSTED FLAKES with Tony the Tiger.   There’s not one skate historian that disputes his early ground-laying influence on our sport today.  In so many words, there’s a little Torger in all of us. 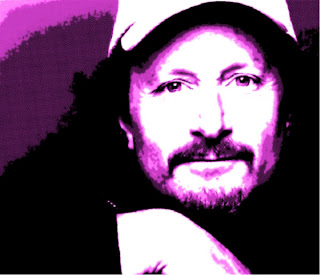 
Stacy Peralta   Longtime business partner George Powell gave the career background and innovative prowess of Stacy from skater to small time filmer to video director to Hollywood director with several of the most prestigious awards already under his belt.
Stacy himself described how some of the best times were climbing fences at schools to ride banks in the dark and how that help in the development of his style.  To this day he shares the same feeling a skater just starting still feels.  There in lies the generational connection.
He laughed and said his claim to fame was in being the first paid shoe sponsored skater (VANS) and held his award up to Steve Van Doren and said…”I think I finally deserve that shoe model now!”  (Crowd laughed hard) 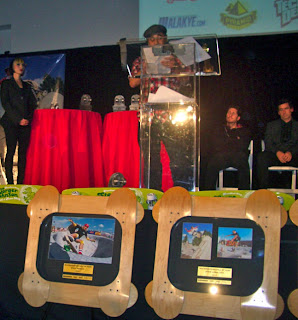 Steve at the mic.


Steve Caballero   Stacy gave an intro that only he would know.  He came clean on how and why he had to have Stevie on his Bones Brigade team.   The thought was when he saw Stevie skating that he was so small that he looked like he was 6 yrs old, but was powerful.   He later discovered he was 12 yrs old and new that if he didn’t get him on his team that his guys would eventually have trouble beating him in contests.  The relationship is one of the longest in skateboarding history today!!!
Steve gave the most heart-felt speech I have heard in quite some time.  Every aspect was relatable to the most die-hard skater to the high end pro.  A skater is always a skater.  He attributes his success to being humble and not letting success ruin him.  He stated it can be your undoing or your asset.  He claims it has led him down many paths and has benefitted from its existence in his life as well as Jesus Christ.   Officially been skating for 35 years.  First signature skate shoe in history, an avid collector, accomplished musician…the accolades go on and on.
He said with the guidance he has had that it was easy to keep his head on straight…pause…then he remarked “So to speak”.  Crowd exploded in laughter, as most are aware Steve has a spinal condition that has had his head tilted since childhood. 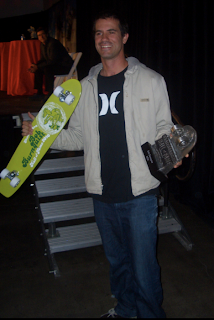 Bob Burnquist was in utter awe and on the high level of humility.  He simply couldn’t believe that his dream of growing up in Brazil and skating instead of playing soccer one afternoon had led to this night.  He didn’t quite know how to take it cause his idols were on the stage with him.  It was the epitome of how a true skater feels and why they skate…it isn’t for awards, but for the comradery!  Bob is one nicest and most progressive/approachable skaters you will ever know of.
Eric Koston  was also in awe of the ceremony and the company near by.  He stated he went from having and ad deadline to being at the “ABDUCTION” ceremony.  A little joke that Guy Mariano mentioned to him that same day while skating.    Eric thanked Eddie “El Gato” Elguera and told him he would be joining the inductees shortly for sure!  Eddie just grinned as if to say this was Eric’s night…put the attention there. 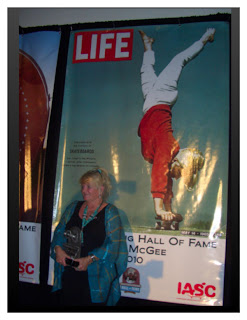 Patti McGee –The first female inductee into the HOF as well as the 1965 Women’s National Champion and deemed the official first SKATE BETTY.  How many of us know of her iconic image on the cover of 1965 LIFE Magazine.  To think that this woman wasn’t just skating for a fad, but had her own scene down in San Diego and had the support of her mom to do anything she ever wanted.  Of course, she chose skating!  A pure treasure to speak with about her skate experiences.  Her daughter introduced her and told the crowd she always knew she had the coolest mom on the block while growing up. 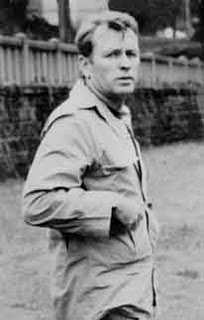 Larry Stevenson  Mr. Makaha himself credited with the first official skateboard company lineup.  His shapes defined the modern-day skateboard post rollerskate/2x4 era.   He is bed ridden currently so his son accepted his award and panned his Iphone around the crowd to a rowsing standing Ovation for Larry’s contributions in the 50’s and 60’s
Craig Stecyk III-  This introduction by Jim Fitzpatrick (aka first sponsored skater ever) sums it all up.  Craig has influenced more people than just about anyone in skating.  He is also one of the most behind the scenes guy you could ever hope to meet.  His vast knowledge, creative approach, and insane intellect has put him at the top of heap of support and influence to people in every generation of skating.  The not the self-proclaimed anything, but there are those who would say he should be proclaimed for much.  One of the Zephyr royalty, Craig was behind the scenes of Dogtown, behind the scenes of Powell-Peralta, behind the scenes of Thrasher Mag, TransWorld Mag, Tracker Trucks, Independent Trucks…he has a fingerprint on much of what we know of as skate history.
This one quote breaks it down as a timeless depiction of skateboarding that Craig has been aware of since it’s beginning.
“Two Hundred years of American technology has unwittingly created a massive cement playground of unlimited potential, but it was the minds of 11 yr. olds that could see that potential.”  -Craig Stecyk  1975
Jim Fitzpatrick introduces Craig-
“For 40 years if you had questions about Skateboard industry or surfing industry…if you wanted to know what was going on…if you wanted to know who was doing it…why they were doing it…where it came from…where it was going…there was 1 person who had the answer.  There was 1 person who knew why, who when where what how.  For more than 40 yrs this guys has been a walking and talking and talking and walking encyclopedia of knowledge about video, the essence of our culture, what we listened to…what we see…our attitude the psychology in skateboarding…CRAIG STECYK”   The crowd erupted!!! There are those who knew…and those who now know!
Craig’s speech
There have been many words mentioned when asked to describe Craig Stecyk over the years from Enigmatic, Sketchy, Aloof, but the accolade that comes up over and over is the word Creative Genius.  He would never say that about himself though.  He’s simply one of us.
“For me it all started going wrong in 1958 when I took my cousins skates, cut em’ up, put them on a 2x4 and have been going downhill ever since.  This worked out well because I’m here with you all tonight!”
Craig went on to describe how he knows all the inductees on the wall and has interacted with them in one way or another over the years.  There is only 1 man who can say that on the planet btw….Craig Stecyk.  He transcends generations!
“I met Jim Fitzpatrick in 1958 right after the unfortunate incident with my cousin’s skates!”
“Grew up in the same town Jimmy did and from a guy in 1938 riding down our local hill with a door with wheels on it to Peter Parkin  in La Jolla in 1947 was where it all started for us.  The line keeps coming forward…comes through me….comes through you….comes through everyone in this room….everybody out there on a corner…everybody in the gutter….everybody in the alley…they are all riding and this thing is going forward and that’s what matters.  It’s got nothing to do with what we ever did ourselves….it’s going through us!  That’s for coming out and I appreciate this.”  CR STECYK III
Coping Block
For more great Skateboarding stories please visit http://www.copingblock.com/