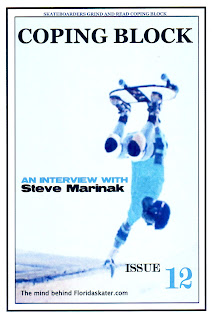 Steve you’ve been skating for some time now, when did it all begin for you?

I started with a clay wheeled Super Surfer in the early 1970’s, a short time after that urethane wheels came on to the market as replacement wheels, they were an amazing improvement.  Small cracks in the sidewalk, or those mini pinecones from Australian pine trees were no longer a death sentence.  I grew up near Singer Island and Juno Beach, both surfing towns in the 1970’s.  The older neighborhood kids were surfers and I primarily skateboarded more than they did, since I was so young I did not drive or go the beach with them.  However, their Surfer Magazines would show a random picture of a skateboarder now and then. Along with that small ADS were now starting to appear in Surfer, like Bahne Skateboards.  Guys like Bruce Logan and Dennis Shufeldt were early skaters in these photos.  I would whip through Surfer Magazine to find one or two skate pictures or ADS and realized that there were others out there with the same passion for skateboarding.  Then finally one day, in Surfer Magazine an AD appeared that they would have a premier issue that would cater to skaters, it was naturally called Skateboarder Magazine.  I signed up for a subscription before it ever hit the newsstands and never missed an issue all the way until it’s demise after it morphed into Action Now.
I got my first issue in 1974; I was ten years old and knew I had found my calling. I was a Skateboarder.

Who were the main skaters in your skate crew, and are you still skating with any of them today? 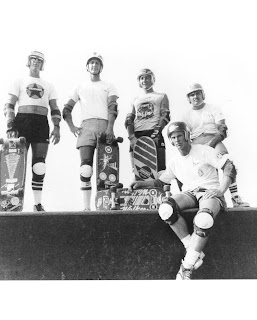 Steve and part of his skate crew.

Obviously you love skateboarding, but if you could narrow down three things you really love about the sport what would they be?

1.     Freedom.  Skateboarding frees your mind. It allows you to completely escape into an age-less, worry free zone for that moment in time.

2.     Creativity. Skateboarding assists your mind to think creatively beyond the act of skateboarding. It has opened doors for me in all areas of my life allowing me to believe anything is possible and attain goals with the same methodology as learning a new trick.

3.     Physical rush. There are a few other sports I also do like surfing, or snowboarding, that offer a similar type of physical adrenaline rush. However, those other sports take a little more preparation and gear.  The simplicity of grabbing a board slapping it down and rolling down your driveway can be had by almost everyone. A good skate session or a simple cruise down the street can offer you a thrilling feeling that more people should experience in life. Push, Carve, and Grind, as you have eloquently put it captures this spirit.

You’ve seen a lot of skate parks come and go, which of the now defunct parks stick out in your memory as being the best in the bay area?

At fourteen, I skated in the second Clearwater Skate Park Sun & Fun contest, road tripped with the Sundancer skateboard team out of Lake Worth, Florida. That was one of the great Florida Skate Parks, maybe not because of the terrain, but Muriel Yantis efforts to create such well attended skate events.  She managed to get a lot of print space in Skateboarder Magazine as well.  Hats off to Muriel for putting us on the map!  I attended USF in Tampa from 1982 –1987. During that time we would skate the Bro Bowl, Grigley’s Ramp, and the Brandon Ramp. Each of those places had their own vibe and special ness.  At one of the bigger St. Pete Ramp Jam’s at Grigley’s house, I decided to go cheap and camp in my VW Van in the lot across from his house. It turned out to be one of the coldest nights in many years. I’m not even sure I had any sheets, let alone blankets. I put on all my pads, and any clothing I had, helmet, the whole deal. I can still feel the chill in my bones, LOL! 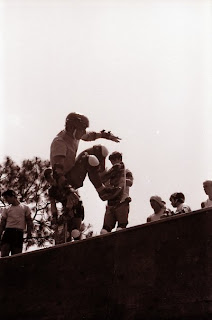 Steve re-enters the ramp during the Florida Backyard Ramp Series.

What would you suggest to a community that’s currently contemplating building a concrete park?

Since I have three kids and have brought them to parks through the years. I notice it is very intimidating for novice skaters to show up to a skate park, let alone drop in.  I would like to see some rounded lip areas for the younger kids to simply roll in and get comfortable pumping and throwing their weight, carving, and having fun.

You must have had a dream set up back in the day? What would have been your ideal deck to ride and what were you skating on back then?

Each era had their special setups. Here are some of my favorites.  The first board I earned money to purchase was a 1973 Bahne with Cadillac Wheels.  The skinny Bahne with the block lettering before they goofed up and tried to make their own trucks and changed the wheel formula.  Road Rider 4 wheels with precision bearings were like riding a cloud; the first thing you would notice is the quiet ride and whoosh feeling.  In the mid 1970’s the Sims Taperkick was just a beautiful piece of woodwork, I still have mine and I still see some on ebay that I would love to have, but they are pricey.  Around 1977 Powerflex 5’s dominated all wheels, they had a good shape and size, they were fast, and they came in multiple colors too, a very 70’s thing.  The Sims Lonnie Toft was a must have deck.  I would bet they sold a ton of those models. I had one for a very short period prior to getting sponsored by Sundancer in 1978.  I do wish I kept that board; it had white Sims Snake wheels on it.  After Sundancer, I rode a Sims Mike Folmer model as we (Pat Love, Johnny Miller, and Scott McCranels) all rode for Sims.  I was finally on the dream team…then I got a letter from Sims that they sold the company to Brad Dorfman and all team product would halt until they settled things out.  At that time we hooked up with Walker Skateboards and we all rode Mark lake Models.  Both the Folmer and the Lake boards were a little smaller than the gigantic pig boards of the day.  Shortly after that FOX decided to get back into selling their own brand, they approached us as a local team, offered Pat a signature model and we decided to help endorse those efforts as a group.  The boards were actually Powell Mike McGill decks. Powell would screen them with the FOX Pat Love graphic.

What impresses you most about the skating you are witnessing today?

The first thing that comes to mind is Bob Burnquist and his mega ramp. That guy’s brain has gone to the outer limits and he’s got the skills to fulfill his dreams. 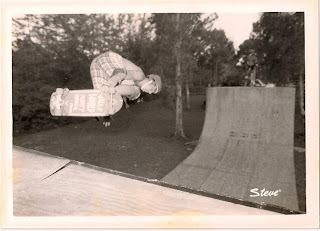 Who are your favorite skaters of all-time?

I’ll steal one of Folmer’s quotes in a past Floridaskater.com interview. “Any Florida skater that has left blood in some Crete.”

What group of Florida skaters do you think had or have the greatest impact on skateboarding nationally?

Every skater in the Florida Skateboard Hall of Fame has made an impact. We are working on some really exciting stuff for the Hall of Fame. The future of the HOF will be great!

How did Florida Skater on-line come about?

Floridaskater.com came about because I wanted to reunite all Florida skateboarders from back in the day.  Along with that I felt that we never got the amount of recognition the Cal skaters got due to our location.  So I wanted to give something back to the guys I looked up to, and friends I skated with.  We had our first event at Kona Skate Park in Jacksonville in 2001. We had hundreds of skaters show up from all over the country and the world.  It was an amazing turnout. We realized then we were on to something and created the Florida Skateboard Hall of Fame.

What skate parks still in existence do you want to skate?

Still in existence? The only two I know of are Kona and the Bro Bowl, both two of my favorites.  Ones that are gone and I’d like to skate are Cherry Hill, Upland, Del Mar, Marina Del Ray, Whittier, oh and if I had a time machine I’d really like to ride the Kentner Banks with the Z-Boys, Carlsbad with Greg Weaver, and the Dog Bowl with TA, just for historic thrills.

What do you think the future of Skateboarding is?

It has definitely eclipsed surfing as far as size. The sky is the limit.

What was your favorite Old School Skate AD?

The Cadillac Wheels ADS were cool.  Plus the Sims ADS were really nice, like the ones with Dave Andrecht, green wheels glowing, wide-angle lens. 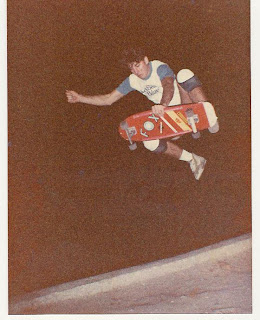 I’ve always worn Vans, but those Lance Mountain Nike Hi tops are looking pretty cool; I may have to get me some.

My custom Deckcrafters! It’s a great blend of Popsicle stick with length and width I want. Plus the quality can’t be beat.

I must be getting old. I don’t even know who these girls are! LOL!
My wife is #1 in my book. As Ricky Bobby would say, “she’s smoking’ hot”!