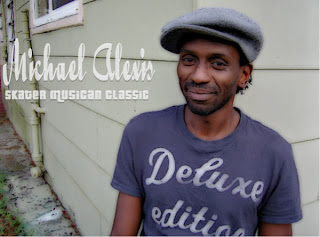 Cleo: Where ya been man?

Cleo: That’s all there is.

Alexis: That’s all there is, that’s all it’s really all about. 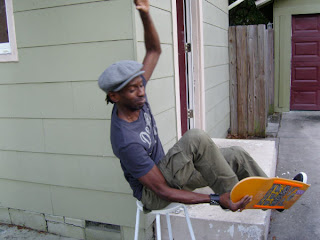 Cleo: Did those backside Ollie’s you used to do at Justin’s make you happy?

Alexis: When it’s all said and done, yeah! Between all the bills it’s about just under thirty thousand dollars!

Cleo: Break it down to me.

Alexis: Break it down? Ok, ah, (pointing at his wrist) it’s all wrist, it’s all that. That’s thirty grand right there. You know I had to have a nice little plate put in there, so I had surgery. My initial visit to the emergency room was an eight thousand dollar visit, I went to Dr. Swiggett, and ah, he was my bone surgeon and all that kinda stuff, he diagnosed exactly what was broken and what needed to be done. He also performed the surgery, and between him and the facilities at Edward White Hospital that was  another fourteen thousand. 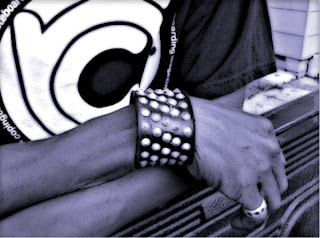 Alexis: Yeah! Plus, for a little bit of time I went to see him for rehab to get it moving again and that was another four thousand dollars, plus I got bills from all sorts of doctors that I didn’t even know I saw!

Cleo: Why didn’t you change your name dawg? (LOL!)

Alexis: I’m not dead yet, so that might happen! (LOL!)

Cleo: Michael, you used to skate the streets around here hard! Skating everywhere, you picked up a sponsor, it was a truck company wasn’t it?

Alexis: Yeah! It was Independent Trucks, and ah..

Cleo: How did that go down? How’d you get on them? 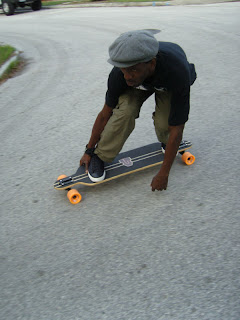 Alexis: Well, I had been skating a lot with him and he had been out in California a lot at the time, and he was back and was showing me what he had learned while he was out there, stuff he picked up. I guess he was impressed with the way that I was able to take it and utilize it and he did the best he could to try and help me out and get me sponsored. Then one Saturday morning he called me up and
gave me a number to call, and I called that guy and had a conversation, and it turned out that the guy was Fausto.

Alexis: Yeah, yeah, and he put me on the team and he was like, “let’s see what happens” you know, and every contest that came up I entered and placed good in every one and so it went, and they started sending me the boxes. It was good! 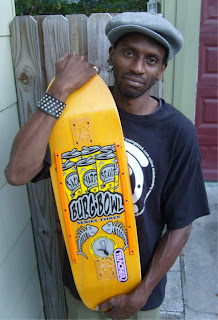 Cleo: Wow! You were grinding them up! I remember skating with you behind Lakewood High School, or was it Lake Vista?

Cleo: You were doing Bench Ollie’s, Ollie board slides, Ollie disaster slides across benches front and backside, foot plants to tail, Ollie’s to nose pivots, all kinds of tricks at will.

Alexis: That was my little training ground back then at Lake Vista and Lakewood.  They had these concrete benches back then that were just perfect for anything! Anything street! They were great for slides, grinds, perfect height you know, you had to have some Ollie skills to get up on them, but it was a perfect size, a perfect layout. If it was raining out they were covered so you could still skate them. Perfect.

Cleo: I know that when I used to watch you skate you always had this really light style, like your body loss weight while you skated. You have this constant body ollie action going on that’s so light.

Alexis: I was taught by somebody we both know to ride on your toes, always use your toes, toes are where your control is at. To this day people are like, “Mike you’re all toes” and I’m like, “You damn right”. LOL!

Cleo: Now when did the “ZAAAAAAHH” factor come in?

Alexis: LOL! Very early in the game, I was introduced to the concept of “ZAAAAAAHH”. 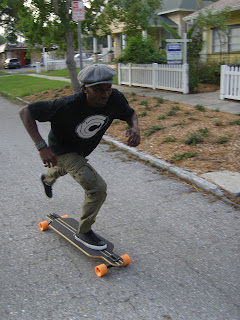 Cleo: LOL! What a trip! You know you shredded the BRO BOWL man, and also “Justin’s Bowl” which was widely known as the “Burg Bowl.”

Alexis: It shredded me a little bit though, it got me good, it got me into surgery.

Cleo: It caught you sleeping.

Alexis: But I’m gonna say that the Bro Bowl is my favorite place to skate of all-time. It’s one of those places that is always opening up. As you learn it sorta grows with you in a way. You grow into stuff that you can do there. You know what I mean? It’s like always a challenge in a low- pressure environment. It doesn’t come across as a very intimidating place, however the potential for just sickness is infinite. You know? There so many ways that you can flip that bowl and do something sick! It’s just a freaking great place to skate.

Cleo: A lot of people don’t know that you were with the Funky Groovy Caterpillars. 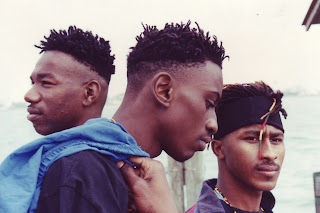 Alexis: Yes, the Funky Groovy Caterpillars. Well, the original members were Anthony Florence and Myself and then we later added Pete Banks and that was DJ DRE. He later went off into Drum and Bass fame. But originally, it was just Anthony and I, who was just here a little bit ago.  When we started that band there wasn’t much of a hip-hop  scene in the Tampa Bay Area and not much of a radio scene either as far as, you know specialty type music, which at the time was rap music. Which was sort of the new kid on the block, wasn’t easy to find it, and you had to kind of be in the know to find it and we quickly latched on to it. I mean we were kids when it came out, I was about ten or nine years old when it first came into my world. It quickly became the thread in my fabric, you know what I mean, its my foundation. So um naturally, after we gained a little more confidence in music and we  got a little bit older, we started the band and it was the Funky Groovy Caterpillars. Yeah, it was a really exciting time, an exciting time for rap music in this area. There were a lot of people trying to do a lil’ something, we were part of it and I feel we deserve a part of Tampa Bay History musically. 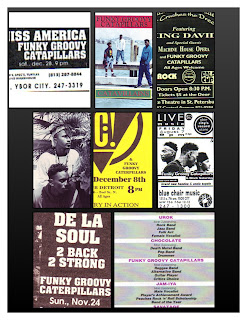 Cleo: Hey, you guys won! You were voted the best rap funk act in the Tampa Bay Music Scence!

Alexis: Yeah, the very first one right, the first one! 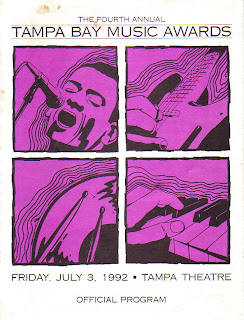 Cleo: That was sick! You came in and crushed.

Alexis:  Yeah, and we were a piece of history, and that’s brilliant and wonderful.

Cleo: Some of the groups you guys opened up for were, My Life With The Thrill Kill Cult, Consolidated, De La Soul, 2 Black 2 Strong, Digital Underground and others.

Cleo: Your sound it’s self was fresh!

Alexis: Yeah, it was a different sound for the time.

Cleo: You had a keyboarder that was kicking some awesome chords and grooves, what was his name?

Alexis: Dave Christopher, he is doing the Rabbit in the Moon thing in L.A, along with a couple of other people from the area. They stay busy doing re-mix work and their own original works. Several other things so he’s staying pretty busy. 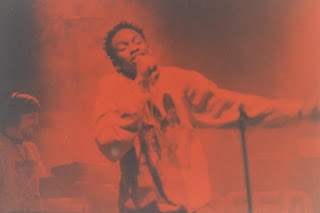 Cleo: You’ve been doing some new music yourself these days.

Alexis: Yeah, I put out “Weapons of Peace” an acoustic release, before that I put out “Smile and Cry” which was a little bit more a dance venture. I’m working on a new release right now and I have several pieces, but no name yet for the work. 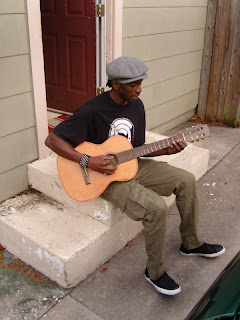 Music flowing from the soul of Alexis.

Cleo: Will we see the FGC again in the future?

Alexis: Good question, now that Anthony and I have been in contact again, it’s come up more than a couple of times. Sometimes he acts favorably and sometimes not so much. I myself would love to do it. I don’t know what it would sound or look like, were talking about twenty years later.

Cleo: I meant to tell you that I have a video of the FGC at Lowry Park in Tampa! Now, skating wise are you getting back into the Street? Bowl? Longboarding or what? 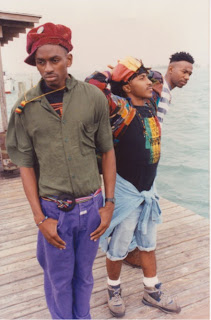 Twenty years ago the FGC Rocked!

Alexis: My big thing right now is my park tour with my friend Jimmy. We’ve been going to skate parks all over Florida. Were going to start filming soon, and were going to call it the Mike and Show. You’ll be hearing about it real soon.

Cleo: Can Coping Block Skateboarding Magazine do something on it?

Alexis: Absolutely! We’ll work out an exclusive for ya. 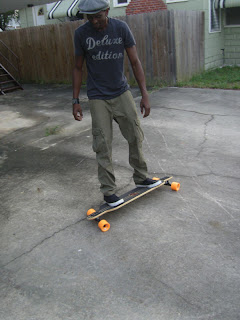 Cleo: Where do you see Michael Alexis in the next couple of years in music and skateboarding?

Alexis: I’d say a lot more visual, and more accessibility for people so they can see what I got going on.

Cleo: So you going to pass the gravy?

Cleo: Any thanks or shout outs at this time?

Alexis: First I would like to thank the Coney Family mainly for creating a lifelong Bucs fan, and for teaching me skateboarding. Thom Nickelson, Brucifer Whiteside, both very influential and instrumental in my skate career. Faustino, such a cool cat and finally, my Ovados family and my homies who still go skate w/ me Yimmy, Justin, Will, all of youz I love yaz! 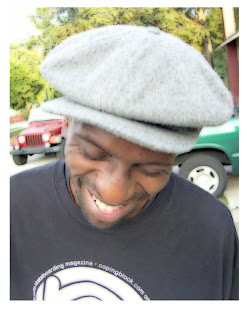