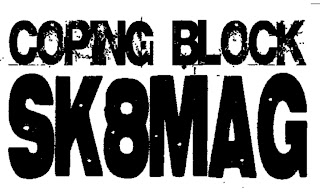 Some thirty eight years ago my Poppa made it possible for me to get my first skateboard.  I was so proud to be the new owner of a solid oak wooden deck with Chicago trucks and clay wheels with loose ball bearings.  I was only nine years old at the time, but on that day skateboarding changed my life forever.  Every skater knows what it's like to be stoked on skateboarding! The anticipation of the next ride, the next session, the next new trick that you would learn.  It's just an incredible amazing feeling!

Well, I owe everything to my Poppa, my first skateboard, rides to the skate parks, plus he let me construct ramps in his driveway beginning with just a sheet of plywood placed against the tail gate of his ancient red rusty Datsun pick up truck. Since those days my growth in skateboarding has culminated into an on-line skateboarding magazine called "Coping Block Skateboarding Magazine", the blog portion of which you are enjoying right now.

Thirty-eight years later, my Poppa whom was the catalyst of my involvement in the sport I love came down with Cancer. At some eighty one years of age it was determined that he had two forms of Cancer. Melanoma in the foot, and a Cancer in the upper lobe of his right lung.  So he had two surgeries which were followed by a massive stroke! All of this in a short five month span! To say that I was devastated is an understatement. 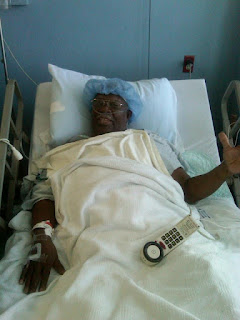 But being the strong man that my Poppa is, a Vietnam Veteran, a man that had served his country for twenty years prior to retiring, a real man whom help raise four children, he is fighting back and is recovering. Slowly, but he is recovering. I love him.  So this past March it became very important to me to do something special for his birthday. Something that he would like, but something that would be from the deepest parts of my heart. 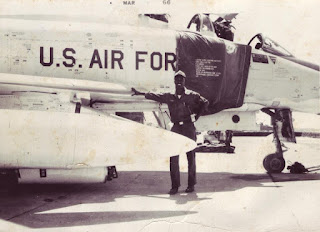 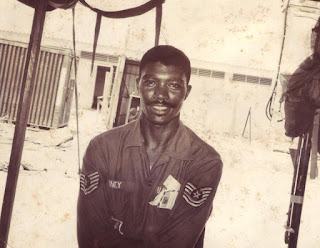 The day's leading up to his birthday were becoming shorter and the many ideas I had inside my head lacked the inspirational impact I had dreamed about.  So one day while out promoting "Coping Block Skateboarding Magazine" which I love to do by the way. I came upon an art Gallery owned and featuring the marine life art of BC "WOO".  As I gazed through the glass at the marvelous artwork hanging life like on the walls of the gallery, I decided to go inside and take a closer look.  To my surprise the artist was in the store. 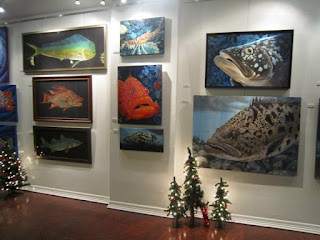 My eyes nearly popped out of my head as I took in these spirit lifting fishes painted so vibrantly that they seemed alive! "BC" made his way over and I asked him if it were alright to leave some of my Coping Block Skateboarding Magazine fliers on his community table. He smiled and said sure! He then went on to share with me the fact that he used to skateboard as well.  Some minutes went by, then a half hour, then about an hour later we realized that we knew some of the same skaters.  We also both road for a defunct skateboarding company at different times in the far past by the name of "Brand X".  Small world, one skateboarding family. 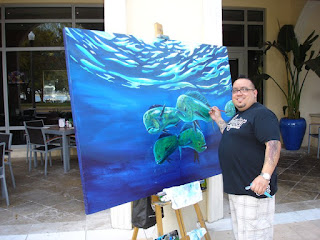 The late BC "WOO" painting outside.

After the discussion on skateboarding came and went, I asked him how long had he been painting.
This lead to my finding out that he had a form of Cancer that was in remission and being watched regularly. That only after he had been in a fifty day coma did he rise up and take up the brush not many years ago! I was like Wow! I shared with him how my Poppa too had been dealing with Cancer, and that I was trying to get him a special gift for his birthday. I told him how much my father liked to fish, eat fish, and inquired about how much it would cost to have him paint my Poppa a fish for his birthday.  He said he would do it gratis.
Oh my Gawd! I couldn't believe it! I asked him would he paint one on the bottom of a skateboard for me and he said sure.  I was so stoked! I mean BC WOO's original art sells for thousands, and thousands of dollars!  This would be the best gift to my dad! To give him back a skateboard, one with a fish on the bottom!

The next day my longest running advertiser in "Coping Block Skateboarding Magazine" Gulfcoast Skate Shop, put me in contact with "KLEVER" Longboards which donated a white longboard to my Poppa's birthday project. I drove over to the "KLEVER" Longboards design center where I was presented with one of their prototype decks, I then took that deck to BC WOO who went to work on it.
Some days later I received a phone call from BC WOO to come and pick up the finished skateboard.
I arrived at the gallery after work and my heart was beating fast as the excitement and anticipation of seeing the finished deck rolled around in my mind. What would it look like? How many fish? What would be the colors? As I walked up to the Gallery door I could see the deck on a stand in the front room of the Gallery. An orange fish filled the center of the deck.  I rushed in to get a closer look, and WOW! what a great job! 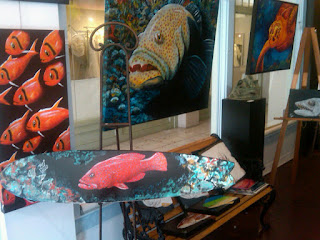 The deck inside Gallery Woo.

What a tremendous gift for my Poppa with the help of an artist, a skate shop, and a skateboard manufacturer. Once again a connection to skateboarding, all leading back to that first skateboard that my Poppa gave me, only now I'm giving him one back.  Now here's the kicker, the orange fish painted on the bottom of the board is a type of grouper, grouper also happens to be one of my Poppa's favorites to dine on. But it is orange with blue speckle ones that are known as a "Coney" grouper, which also happens to be our families last name! Coincidence? Woo is no longer with us, but his memory and influence is passed on forever. 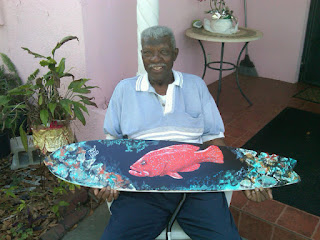 Poppa with his "Coney" Longboard.

Update: My Poppa passed away in April 2016 and was buried the day after my birthday at Bushnell's Armed Forces last resting place. Both of them now on the other side. I miss you so much Poppa! Love you.