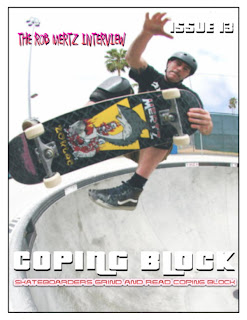 Rob you are what we call a “multi-state skater”, where are you originally from?

When did you move to Florida and why?

I left Pa. To live on top of the Clown ramp in Dallas in 85’, then ended up in Florida.
I think I was going to a contest there.

Who was a part of your old out of state skate crew, and who made up your Florida skate crew?

It was Ken Sigafoos and I that manned the van for all those years. Just traveling up and down the coast. The Florida crew was Morris, Pete, Frazier, Matt, Jeff, Dave R., Bret, Ralf, Tony, Chuck, Doug, Leonard…and I’m sorry if I’m forgetting anyone! 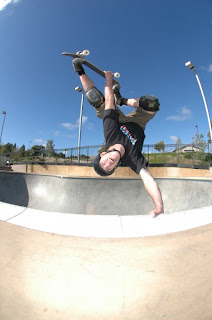 Rob Mertz inverted during his normal day of "freakin rippin"!

What ramp was your favorite in the Tampa Bay area?

I like all the ramps. Chuck’s, Carrolwood, Leonard’s, the “No-Vert”Ramp, Astro, Mikes Vert- Spine Ramp, I learned a lot of tricks on those ramps!

You have left a legacy of shredding big ramps here in Florida, people who have witnessed you skate still talk of those days. What pushes you to skate at such a high level?

Thanks for that Cleo! Some guys have that natural talent and some guys have dedication, desire and commitment. I definitely fit in the latter.

How many companies have you skated for? 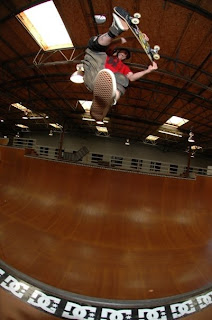 How did you come up the idea for the “SHARK” graphic?

I just thought that the shark was the gnarliest thing on the planet..and what would be gnarlier than a shark coming out of a graveyard? NOTHING! Ha..and then having PUSHEAD draw it-Sick! Rocking that graphic today.

I remember you talking me through the motion on backside boneless ones. I made my first one under your watchful eye way back in the day. Are you still teaching others when you skate?

Yeah, I’m always trying to push someone to slam! HA! 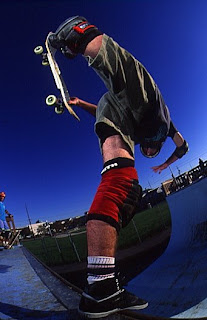 Rob Mertz demonstrating a backside boneless for those willing to learn.

What are your favorite tricks?

Big smash down tricks! Anything that you will get really hurt on if you slam. I always tried to do unique tricks and make them my own.

Where are you skating at these days and with whom?

Skating a lot at the DC Vert Ramp early mornings before work. Was skating with Borst a bunch, and now it’s Paul Wisnewski..pretty much anyone who’ll session with me at 8am, not too many people down with that. Then skating all the parks out here, Encinitas pool, Culver City pool, new Fontana pools.

Do you get skate often?

When I’m not hurt, I try to skate at least once a day.

Who are your favorite skaters of all-time?

Wow! Early guys would be Duane, Salba, Malba, Olson, Andrecht, Elguera, and then Tom G., Murph, Craig and Tex, Hosoi, Hawk, Gator, ( yeah I said it), Frazier, Sean Miller and all the rest of my east coast bros. 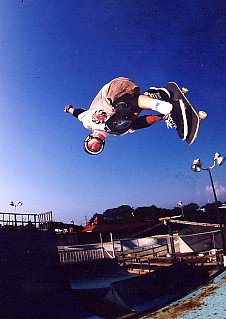 Are you involved in any other aspects of skateboarding?

Business side I own Syndrome Distribution, but I really stay out of the “Industry” side of it. We do our own thing.

Do you have a preference for pools or ramps?

Being from Pa., we only had a few pools to skate, so I’m a Vert Ramp kid but pools are a real close second, I love’em.

How do you feel about street skating, and do you think Vert Skating is dead?

Vert isn’t dead! I was just at the Protec Pool Party and watched some fourteen or fifteen-year-old kid from Brazil, do every kind of eight foot high 540 you can think of! There were a ton of new kids ripping!

I really like the challenge of not being able to do a trick. I get on the verge of smashing my board and leaving, and then powering through mental anguish to make it is the best feeling ever. It makes it even better if I slam and then get up and pull it. Although, every slam now seems to put me out for a year.

When are we going to see you back in Florida?

I haven’t been back in forever. After all the years I spent traveling, I’m really content on my one- hour circumference of skate parks right now. So much good stuff, I would like to come back and see everyone one day.

Any shout outs to your old buddies here in Florida?

I already did! The Florida crews and sessions were some of the most fun times I’ve ever had and I hold those years dear to me. Thanks to all those guys for being there.

Any words of wisdom for those young skaters reading this interview?

Keep skating aggro! Look at footage of Frazier and skate like that!