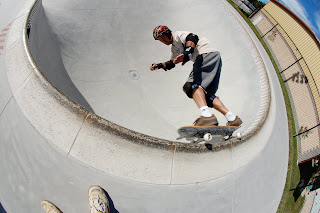 Dave your name brings instant respect and appreciation when mentioned in any skateboarding related conversation around the state. You’ve been involved in skateboarding for some time, beginning in those glorious Clearwater Skateboard Park days of yore. You were also instrumental in getting the city of Dunedin to recognize a need for a quality skate park and helped to get Stirling Skateboard Park built, and everybody thanks you for that!

When did you first realize that skateboarding was in your blood for good?

Wow, that’s a big question.  I first rode a skateboard when I was around 8.  It was a Hoby Super Surfer with clay wheels.   I was hooked from the minute I rode down the driveway.

Back in those awesome skate days at Clearwater Skateboard Park whom did you skate with?

I skated with the Team a lot, which included GBM, Womble, Pat Parker, Jeff France, Todd Sondegrath, JBM, Fisher, Schumaker and all those rippers.  Oh, and the younger guys on the team like Tony Simotes, Mike Coccia, and Jimmy Marcus, those kids were awesome.  I skated a lot with my surfing friends too, like Shane James, Donny Staley, Kevin O’Connor, and that crowd.  I can’t remember everyone I skated with right now, because I skated a lot, just about every night. 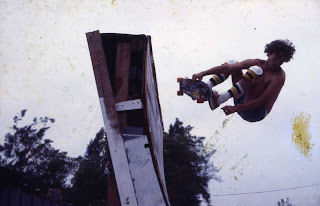 David flying frontside on an ancient ramp back in the day.

What are some of your most memorable times you have of Clearwater Skateboard Park?

I have so many really good memories from that time in my life.  It felt like my second family there, and I needed that at the time.  One of the best times for me was the grand opening of the park.  It was like a dream come true to have that much concrete available to be creative on.   The weeknight sessions were always hot, and skateboarding was progressing at such a rapid pace in 77/78, that from one week to the next, the level would just go up and up.  That fueled my fire for sure.

When you skate Dave, your style flows like water, did surfing create your style or
were you always smooth like butter on your skateboard?

Whoa, thanks for your assessment.  I would like to think that surfing and skateboarding together have influenced my style, but back then skating was always about trying to emulate surfing, so that approach probably influenced my style.  I was trying to be like Jerry Lopez at Pipeline man. 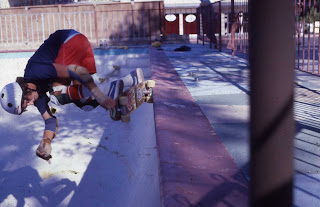 Wheeling some coping block back in the day!

Looking at the finished product that Team Pain delivered at Stirling Skateboard Park, and after skating in countless sessions at the park, is there any design changes you would make, or park extensions that you’d like to see?

I really do think Tito and the Concrete Crew for Team Pain did such a fantastic job designing and constructing the Sterling Skatepark in Dunedin.  And I enjoyed being a part of that process.   As for design changes, no, I don’t have anything on that.  However, I believe a true street plaza designed for competition on the area where the basketball courts are would be a great addition to the park.  We’re going to work on that with the City in the coming months, so stay tuned.

Just how long did it take in the process of working with the City of Dunedin to get Stirling Skateboard Park approved for building?

Well, I was invited to participate as a member of their origin Task Force back in 1998, and the Grand Opening of the park was in September 2007, so around nine years.  I’ll be honest and say there were periods where I would get frustrated and just give up.  But I would regroup and go back and talk to the leaders in our community, and promote the concept of a poured in place concrete park.  I learned a lot along the way, made many mistakes, and probably ruffled a few feathers, too.  But in the end, it worked out for the best.  Had I convinced the other members of the Task Force to support a concrete park back in 1998, we would not have what we have now, because skateparks have progressed so much.

What would you suggest other skaters in other communities do to help move the process along and to help win approval of such?

Get to know your community leaders on a more personal level.  Get involved with the process by requesting meetings with your recreation leaders. Go in prepared with photos of other projects and educate them on how important a skatepark is to their community.  Recruit your support from outside the skate community, like business owners and law enforcement.  You’ll be surprised how much you can get done.

Dave you’ve seen some radical skateboarding over the years by various skateboarders, whom are your all-time favorite Florida skaters past and present?

Man, there are so many really good ones I’ve enjoyed skating with or just watching, but I will say from my personal perspective, Monty Nolder, Mark Lake, Mike Daly, Tullie Carlton, John Grigley, and Chris West all skated the way I thought it should be done.   In the present, I am a big fan of Jimmy the Greek and Mike Frazier.  Oh yeah, and Buck Smith is the man!  He destroyed the pool when he came to Dunedin.

Do you think skateboard parks should develop team riders like they had back in the late 1970’s to compete against other skateboard parks?  The Team Pain Series - Teams from Dunedin, Cocoa Beach, Oviedo, New Smyrna, etc. competing for the title at a neutral site.

Well I haven’t really thought about that.  It sounds cool though.

How has skateboarding enhanced your life?

Skateboarding probably saved my life. It took me to the edge in other less risky ways.  Yeah, my lifestyle has always had skateboarding in it, and I am forever grateful for the friends I have made because I am a skateboarder.
You had the opportunity to go west and skate in some big New Mexico Ditches, what was that experience like?

It was one of the most amazing experiences of my life. GBM was such a great host, and very good race organizer.  Hanging with Kelly Lynn, Chuck Dinkins, Garr Poe, Farid, Jimmy Marcus and Heidi was just so fluid.  I helped set up the course for the Indian School race, and worked the finish line with Gregg Stubbs, one of crew from Texas.  The qualifier was held the next morning and I ran in that one.  I was so stoked to do that.  We went to a lot of the ditches around Albuquerque, including Kate’s Nips and the Bear, which can only be appreciated in person.  We hit up a few pools, partied at Palmers house, and just raged for a few days.  I came away feeling like I had been to the Mecca of the skateboarding world.  The whole scene out there is just so full of energy, and I loved it.  I want to go back in the future. 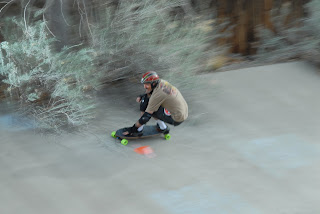 
Select one of the following complete setups:

Oh, the Taper Kick for sure!   I had a couple of them back in the day and loved those boards.
I’d change the wheels to white Powerflex 5s though, trying to be era correct and all.

Did you ever have a Tony Alva poster on any of your bedroom walls back in the day?

No, my posters were usually surfing posters or that black light poster of the hot chick with the Afro.  It was the 70s man!  Just kidding on that one.  Surfing posters were it.  I think I remember having a poster of Mt. Baldy at one time. Waldo Autrey over vert, I think.  It’s all kind of fuzzy. 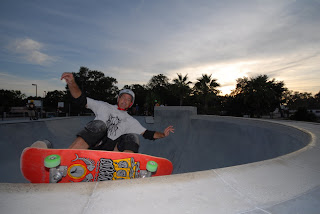 Dave your kids skateboard a little, what is it that you would like them to take away from skateboarding and apply it to their lives?

The individual creativity that each of us has inside.  We all need some form of canvas to lay it down.  So if they can explore that aspect of their lives through skating, surfing, or some other avenue, I’ll be satisfied with that.  I just want them to enjoy the experience.

Dave you have been blessed with a great skate history, a beautiful family, and you’ve set a positive example as a concerned parent and citizen.  Thanks for taking time out of your busy life to talk to Coping Block.

Thanks Cleo, you’re right about that.  My wife and kids are a blessing for sure, and have made my life beautiful.  That, and all the good friends I have, like you my man.  Stay cool.