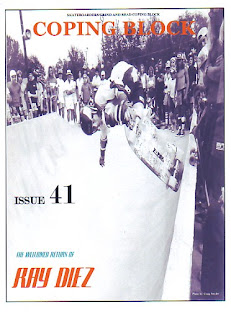 Life is unpredictable to say the least; here we are rediscovering a rejuvenated soul.

Ray Diez, one of Florida’s most talented skateboarders ever, who disappeared it seemed with out a trace, has reappeared, older, wiser, and more aware of life’s simplest pleasures.
His face is the same, just covered in more facial hair, his stance on a skateboard unchanged, his eyes newly full of the flame that only a beautiful family can provide, his heart is again beating rapidly in anticipation of his next skate session. His laughter is undeniable, and it is back amongst those who remember his “at speed rock n roll board slides“, on the coping side of Clearwater skate park’s concrete vertical extensions. We “Old School” types who witnessed first hand, Ray Diez’s truck axle’s complain loudly during his layback grind assaults on the coping of every skate park he sessioned, cheer his return. We know of his stylish tail stalls, non-stop sweepers, frontside airs and how he helped to elevate every session. We know of the youngster who helped Kryptonics make a name for themselves on the east coast.
Thirty years later Ray Diez is back, and the skateboarding family gladly welcomes his return.

Have you stayed in contact with Steve Anderson the whole time?

Nooooo, I hadn’t talked to anyone in thirty years! I was like down and depressed and I went to Google and Googled my name. Maybe my obituary would be there man.

Maybe GOD would tell me something, like Ray Diez the Grim Reaper is looking for Mr. Diez, and guess what happened?  My name came up and it was connected to old skateboard stuff. I didn’t even know I was invited to KONA for an event; I saw my name on the list and just got over whelmed with joy. I started looking around and saw all these articles that Craig Snyder wrote. I saw all these old contests with my old fellas, like Anderson, Gelfand, this one, and that one! I started looking into it and I found the Sensation Basin listed on You Tube, and under Sensation Basin was listed the Pepsi challenge, and I was skating! I had never seen myself skating on video before!

Yeah, ah but when did you make Clearwater skate park your local skate scene before or after Rainbow Wave closed?

I never made it my local skate park, I just skated everything. But when Rainbow closed I was in high school in 1979, and I got out of skating for a while and then Santa Cruz brought me back in and got me on Independent Trucks, and I went up to Apple Hill skate park and skated there for a while. I don’t know if I ever skated RainbowWave after that, it might have been closing down. 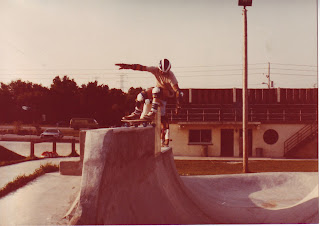 
Ray why did you stop skating?

Man, I got into High School and started getting into football, wrestling, and I guess the freshman and sophomore girls were a little more infamous than vert skating, but man I missed it.

Man we missed you on the scene; tell us about some of the contests you were in?

Yeah! I remember the early days, I remember Kona! Getting there and everything, and I had only been skating for six months. Alan Gelfand was there, doing his little Ollie Pop, he was a young kid then, I was maybe eleven or twelve years old and Tony Alva was there and all these guys. It was just like wow! Like being in Hollywood with Morgan Freeman and stuff and you’re just the little actor from the play down the street! Plus all the good contests at the Sensation Basin, at least three or four of them, we always had a
blast, always the Basin. 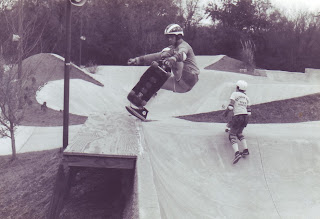 
Who was the first team you skated for?

The first team was Skate Wave actually, and then RainbowWave opened and I went over there because they had the vert. Mike McGill used to skate at Skate Wave a lot, and he started skating Rainbow too, and we all started meeting over at RainbowWave skate park. The vert was more challenging; you know how everything progresses, so we had to go over there to progress. Rainbow Wave sponsored me, but I rode a board by “LITTLE” skates, you remember Craig Snyder? Craig hooked up with Bob Little who
now lives in the islands. He hooked me up. Later, Steve Anderson and the boys got hooked up with Kryptonics and I was right there with them. Much later on something happened to Kryptonics and I ended my skating career with Santa Cruz. My last picture in the mag was of me at Apple Hill skate park; I went there by myself. I got invited up, I flew up there and skated with kids I didn’t know, and ah, they had a big pool. It was all up in Ohio.

Who did you skate with the most?

Steve Anderson, Steve Fisher, George McClellan, McGill, ah, Craig Snyder, and Manny A., he used to drive me around! He was like sixteen and I was like twelve or thirteen! 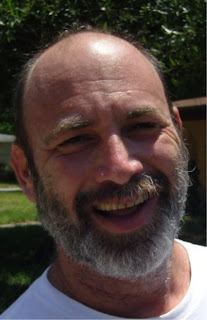 He had wheels! He was a big part of the scene! LOL!

What did your folks think about you skating?

They encouraged it man! My dad never missed a contest; he would drive me around the state. The first contest was Kona, on the way home from Kona they had a thing at Fort Pierce, which was my second contest. After that it was RainbowWave, the Sensation Basin, and then it just took off! Skateboarding was taking off! Sensation had crazy vert you remember the Basin right?
The first contest I was in after getting on Santa Cruz was at Kona, remember I had been out of skating for about four months but Santa Cruz took a chance on me and I ended up doing well and placing in that contest. The last three contests I was in were those PRO/AM contest, McGill and I were tied for first, but then Alan Gelfand ended up winning it, and I didn’t take the money so I could keep my amateur status.
After all that I went back up to Apple Hill skate park, and they had a photo contest and the winner of that contest shot a picture of me, and that picture was the last time I was in the mag. It wasn’t even for skating good, it was just a photo contest. 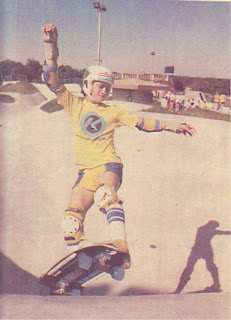 When did you first go to Honduras?

I first went to Honduras in 1995. I had a friend that sent his wife to bring back a ships canon they found on a reef. He gave her ten grand to go recover the artifacts. Later, I went over there with him and I’ve gone every year for fifteen years straight for six to eight months. I met my wife there, I have a home on the beach there.

Did you get married there or here?

I got married here, but Honduras is like, it’s like part of my soul. It’s something I can’t explain. It’s like I almost grew up there, I became a man there. I was a wonderer before when I got there, but I grew up with them people man. It’s such a unique place, when I got there, there wasn’t even electricity, no phones, it was just a little fishing village. A generator would come on at six o’clock at night, and when the fuel ran out about three or four in the morning you’d hear it die down, “bop, bop, bop, bop!” You would wake up about
four or five in the morning because you were hot! You just live a natural life down there, and I had the best times of my life down there. Now they got Internet and everything down there!

Sounds like it’s time for a skate park down there!

Yeah! But they have a heck of a road to skate down, so many roads coming down from the mountains to the beaches! They’ve got waterfalls, it’s tropical it’s great! I love it man!

Ed Womble and them boys did! Them rich kids went to “FLORIDA” but anyway, I saw that, and then I went to the Tim Hubbard site, I didn’t know whom he was and I asked him “Who are you?” He wrote me back and asked me the same and I said, “Ray Diez”. We exchanged phone numbers and he called me back and gave me Womble’s number. I called Womble he told me about the Florida Skater site. I put my number out there and it was like “Boom!” I felt like I was welcomed back into the family! People reached out to
me. It was over whelming man!

We had to find you man, you were never out of the family!

Weird thing is, when I’m back in Tampa, I’m in the same house I was born in.

Full Circle Man, when you are a part of a family of skaters, you are always in the family man.

Circle of life man, I grew up with these guys man! When I was only twelve or thirteen years old, Steve Anderson and I went to California for two weeks and stayed at Micke and Steve Alba’s house. Steve Anderson and these guys were trying to get me to drink Heinekens! LOL! Crazy times man, but great memories!

Now that you are back in the family of skaters, is there anything you want to do with skateboarding in the coming months and years?

Absolutely! First I’ve been blessed with two wonderful kids, I’ve shown them pictures of me skating but they don’t believe it’s me. I told them I know Cleo Coney and they didn’t believe me either! LOL! They said, you a liar! LOL!

Come on, they were like who?? LOL! Nobody knows me Ray!

LOL!
But now that I’m a dad, I’m really involved with the PTA and my kid’s school. I’m trying to give my children the same environment my folks raised me up in, you know that hard love, but I’m here for you. Ms. Perry who sits on the school’s board has a son that’s a skater, and the school has created a skate night for the schools skateboarders that takes place several times a year and is held at the Skate Park Of Tampa.
So I’m looking forward to getting back on my board and promoting the sport anyway I can. It’s a really, really, good thing because it’s a way to introduce kids to skateboarding that otherwise wouldn’t get the opportunity to experience it. This school isn’t that well off and eighty percent of the students receive free lunch. I’m hoping to get some donations of skateboards and safety equipment in the near future, all manufacturers please contact me via Coping Block Skateboarding Magazine. Everything is a blessing, I’ve had so many blessings and skateboarding has come back to me and I’m overjoyed. I want to learn to skate the vert again like all you old guys, like EdWomble, still out there skating, unbelievable! Ya’ll must be Aliens! LOL! 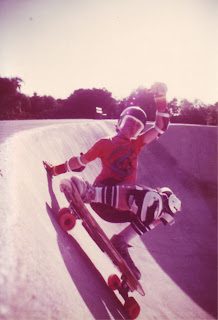 
Any last words, or shout outs?

Man, I just want to thank everybody, and to who ever remembers me, my phone number is always out there now on Facebook, or on Florida Skater. I don’t care who you are, let’s get together and skate, and break bread man.