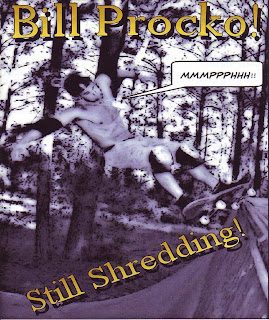 Yeah Cleo, I think it was around '80, either there or Rainbow Wave.

What stands out the most in your memory about Clearwater Skate Park?

Hearing "Thump thump." from across the park, and 17 kids yelling,"Fish is gonna rock the glass!" (Yes, I was one of them) The CSP monthly calendar's trick of the month..rock n roll, Mole Crickets popping under wheels, First sight of Sims Conicals in the pro shop display counter, Bustin and Robitusson parked in front of space invaders. Hiding in the forever bowl when my parents pulled into the lot to pick me up. The sick feeling when” Egg bowl” called and told me they were closing for good...a skater's personal "Where were you when you heard the news" moment. 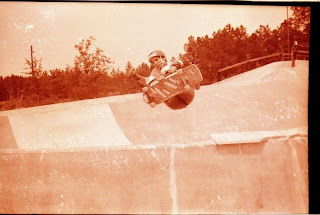 
You were always pushing the limits of your skating, and working hard on new tricks, what PRO skaters influenced you the most in those days?

Fisher, Gelfand, (fs ollies off the top of the plexiglas, those slow, stand on top, single axles on the extensions stay frozen in my mind), McGill, Rodney Mullin (he must be an alien life form, that is my only explanation) then later, Baucom, Monty, Billy Beauregard, Hosoi, watching those guys ...they just made everything look so do able. Then we'd go home and slam ourselves back to reality!!! 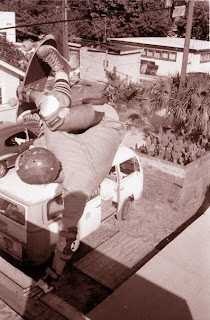 
When did you first skate Rainbow Wave Skate Park?

I think it was right around the time when Clearwater closed and I first started skating St. Pete with you guys. It was after Kit and Linda sold it. Kept changing hands after that. Between the 10 or so skaters left, it just couldn't keep going. I think it closed shortly after I graduated HS. But we had fun! You, me, Bruce, Tom Neidhardt, Bustin, Robby, I think, Mannie Aries, Grigley, Schmitt, Mcgill..we were the last crew before it was auctioned. 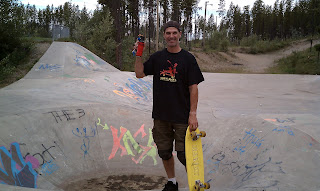 Is that where you first met Paul Schmitt?

Yeah!! He was sculpting cement extensions on the poolbowl and the half-pipe. Always hard at work, while we rolled by asking how long till he'd be done.

Eventually the parks all closed down and you became a local at the St. Pete Ramp in John Grigley’s backyard, what sticks out in your memory the most about those days?

Good friends, good music, rad night sessions, finding other stuff to do during the heat of the day, Paul doing repairs while we mostly watched. Haaa! We were a family. I remember Grigley's dog Charlie, always went ballistic when Paul would drop in. It could sleep through a nuclear blast, but when Paul rolled, Charlie went nuts. Also remember the excitement of hearing that (so and so) was coming to skate, (Monty, Billy, Baucom, Chuck, McGuigan, Daly, Buck, whoever...always great people coming to visit.

Who were the biggest Pro's that came to the St. Pete Ramp that you can remember?

Tony Hawk of course, Blender, Kasai, Cab, Gator, and Monty, you know, most of the greats. My shoulder was in a sling from a dislocation, so I had the honor of judging them at Kona and St. Pete. 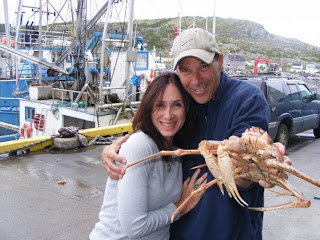 Bill and his lovely wife Kim with their meal in hand.

Rumor has it that you were the original finger- board and finger- board bowl  creator back in the late seventies and early eighties, is that true?

My claim to fame, I started with grip taped aluminum decks on cut down matchbox car chassis, the ones with shocks so they turned with weight. I had a scale model of the St. Pete Ramp complete with roll in and banners. We took it on one of Schmitt's road trips to Gainesville/Rodney Mullen's house. He had it up in his room with Sam and Donny the whole time. I heard Lance had a similar thing going out in Cali around the same time. Don't know which came first, but I sure wish I had put a patent on it!!!!!

What is “Refrigid” Backside Air?

The artistic product of a very bored high school student, it was a "Just for Fun" magazine cartoon.

Who where your sponsors back in the day? 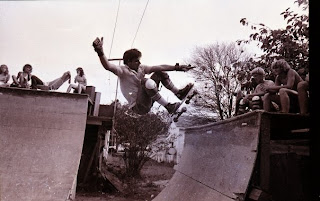 
I remember seeing you in a full page AD, what magazine was that in and for what company?

That was a Vision Industries ad in Thrasher and Transworld Magazine in I think "83 or '84.

Please select one of the following completes.


D-H-L Bill, D-H-L. What Florida skaters did you compete against frequently back in the day?

You of course!!!! Grigley, Buck Smith, Chuck Hults, Mark Buncy, Steve Marinak, Ronnie Lowe, Bruce Whiteside, I think Todd Webb later, and a few others who would travel from back yard scenes of their own. 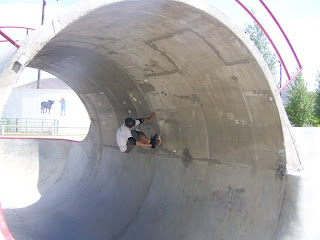 Bill caught up in the full-pipe moment.

What would you do differently if you were in charge of the X-games?

Add a "Reconstructed Classic Parks of the Past" series. Winchester, Big O, Marina, Del Mar, etc, and in Florida of course, Clearwater, Rainbow and The BASIN!!! (Not so sure about Tampa Skate Wave).

When will you reunite with the original St. Pete crew for the “Just For Fun Tour Two”?

As soon as Paul reconstructs Clearwater, Rainbow Wave and the Basin. Ah, no, seriously, we should plan another one, but it needs to be in a VW bus!

What is your fondest memory of Paul Schmitt’s red Volkswagen Bus?

Smelled like a stew of fiberglass resin, 3m grip tape, sweaty pads and cloves. Once, it tipped over on its side in a ditch as Paul was playing around, swerving on a dirt road during a late night departure from Rodney's house. We all crawled out, pushed it back upright, and kept going without even turning off Paul's continuously looping "Madness" tape. Oh and remember when we found Thom Nicholson buried under all of our pads and boards in the back? We had been on the road for like 2 hours, stopped to eat, and realized he wasn't there, and someone said, Hey, where's Thom?" We pulled everything off of him and couldn't get him to wake up, seriously thought he was dead. Paul's Volkswagen Bus was literally it's own ecosystem....But it was also home. 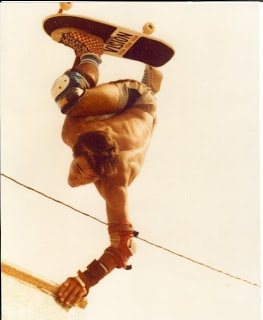 Any thank you's or shout out’s you’d like to broadcast at this time?

Thanks Paul, for taking such good care of us back in the dayz!!! Thanks Cleo and Coping Block, for the interview, and the St. Pete crew, for being there through thick and thin.