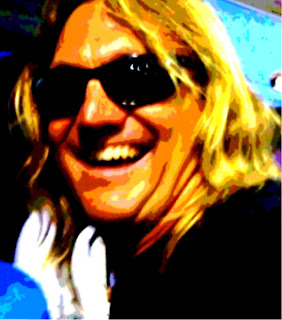 When did you start Skateboarding?

Are you from Florida?

I lived in Indiana initially, and then moved to Florida around 1978 after the change of seasons. Started at Dunedin High School and then skated Clearwater Skate Park, it was my home park. Jimmy Marcus was one of the first Kids I met there; he was like six years old. I then met David Adams, Fish, and Pat Parker. David Adams was always Mr. Smooth and a good guy to hang with.  Clearwater was one of the most innovative skate parks ever. I met Tony Alva and all those guys there. It was an impressive place to learn to skate and to be around a group of people that were way ahead of our time, guys like Mike Folmer that were way ahead of everybody else.

When did you build your first ramp?

I actually built my first ramp probably around 1980 it’s hard to say, it wasn’t a very good ramp the plywood was sideways. It was a half-pipe full of kinks only one ply thick. We located a piece of Plexiglas behind a store one day that was shaped like coping and we put it on top.
David Adams would come by and do these gnarly front side layback holding the nose grinds! All on the worst ramp ever, and no we never patched it! We’d see where the holes were and then we stayed away from them. I’ve got video of it, it was just Gnar! 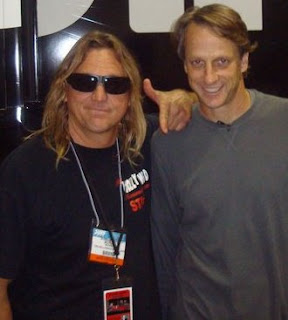 Is this where you skated before the parks closed?

Yeah, Skate Wave in Tampa closed first, and then Clearwater Skate Park, and after that we all went to Rainbow Wave, the Basin and Kona to skate when we could.
Then one day after school my stepfather said get in the car and I was like right on let’s go, and he drove over to Skate Wave and told me that they had just leased the park out so we’d have a place to skate.  My parents knew the importance of Skateboarding and how much it meant to us kids. My stepfather coached little league but we weren’t into little league, he knew we loved Skateboarding. My stepfather opened that door for us.
Skate Wave was not a good park, but if you didn’t have anything to skate, then it was the best. We had that to skate after all the other parks closed. I think we had it for about a year. Mike McGill started skating at that park.

Did you have any additional ramps?

My first good ramp was behind some condos I used to live in, it wasn’t supposed to be there at all.  It was about eight feet high on one side and about ten feet high on the other with eight-foot transitions. It was skated frequently by David Adams, my little brother and I. 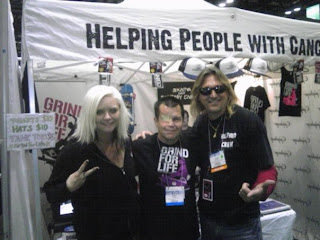 Morgan "Hollywood" Monroe at the Grind For Life Booth

What were deck were you riding then and what was your dream set up?

I had just got rid of a Ripper with bonite in it, and I was riding a Block Head deck with double conical wheels. When I first started skating my dream skate deck was a SIMS Taper kick, Tracker Trucks is what I was skating back then, Bones wheels with racing bearings and Pizza Grip!

What was it like riding Clearwater Skate Park back in the day, and did you have any skate Hero’s?

I remember I used to break a lot of boards at Clearwater Skate Park because we used the moguls to launch from. Who was my hero back then? Wow! Great question! I had local hero’s back then, people like Todd Webb “gnarly”, the “I’m going” attitude, people like ALVA. He had a great time and didn’t care what people would think.

Did you compete in any of the Sun n Fun Events?

No I didn’t participate in any of the Sun n Fun events. I had just moved down from Indiana and I was still dealing with culture shock. Back then there was no transition in Indiana. We went from playground riding in Indiana to learning our first kick turns in Clearwater Skate Park’s half-pipe. I stood on top of the half-pipe one day for about two hours as the owner looked at me through the window of the PRO shop. I was getting ready to do my first tail drop and up pops Jimmy Marcus and he just drops right in. So, I dropped in and I was so stoked and then went inside and the owner said maybe next time, and I said, “I did it”! and he said, “I know”. He was messing with me man. 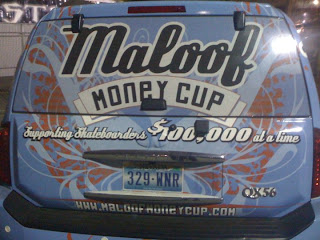 What do you miss about Clearwater Skate Park the most?

I miss the sound of wheels hitting the Plexiglas extensions the most.

You had quite a few ramps though didn’t you?

My later ramp that was caddy corner of Astro Skate had a huge ramp that was frequented by Mike Frazier, Rob Mertz and others. We had a mini ramp underneath one of the platforms so you could still skate even if it rained.

How did the Hollywood Summit Show come to be?

I moved to Hollywood California and did acting and stunts for fifteen years. Got the buzz working for a production company in Cocoa Beach. Started taking acting classes after that and went to California. Not to become a big star, I just wanted to be seen doing movies and get more knowledge of the business. When I got back here I got right back into my old skate click and they had just finished Stirling Skate Park at the time.
I worked on putting a show together with Tom who I met on-line and with Matt who’s the show’s MC. So far we’ve done Wake Board events, comedy sketches, Skateboarding events with the Ian Tilmann Foundation and most recently the Maloof Money Cup. We are stoked and looking forward to continuing to promote and host Skateboarding events.
We want to be innovative and have fun along the way, and so far we are reaching our goals. We want to showcase skate talents that aren’t getting the exposure that they could get if they lived on the west coast. 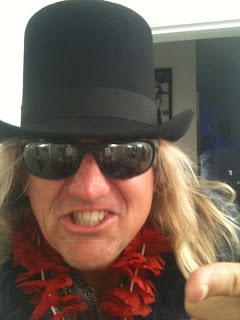 In your face dudes!

What pushes you to go on?

I get a ton of inspiration from Mike Rogers, he has gone through some difficult times and right now I’m battling with some health related issues that he and I’ve chatted about.
He’s a tremendous motivator and he is still out there killing it on his skateboard and I just want to thank him and give him big props. I told him he is the most gnar person I’ve ever met.

What’s new with the Summit?

Right now were coming out with totally new merchandise. We have a specially designed wax that’s formulated for street skating. It’s available in forty-five countries, and it comes in twelve different colors. Unlike the other waxes on the market, which are basically slow burning candle wax, our wax is designed to provide a gliding surface for board slides and to grab when your wheels start rolling. Plus it has a special smell, so when you throw it into your skate bag, your bags contents are going to smell good too.

What do you want people to get out of the Hollywood Summit Show?

I want people to see what we’ve filmed, I want them to take a look at the shows we’ve done and the skaters we’ve helped to promote, I don’t want them to look at me the individual but the overall effort of the Summit Show. When you put yourself out in the public eye, you have to expect to get positive and negative from the populous. I met some great people all over this country and they’ve all been cool to me. It’s a great thing to believe in what you are doing and I believe that I’m helping to promote the sport in a positive way. The haters are wasting their time hating.

Who’s that band I’ve seen at your events?

The band at my shows is the Hollywood house band, “ Full Fledge Unit”. They rock!
They also jam with Steve Steadham when he’s in town. 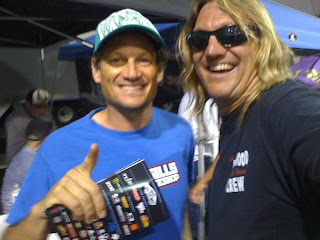 How has your family feel about your involvement in the sport?

My family has been down with skateboarding and my involvement in the sport from day one. I think they are a bit surprised as to how involve I’ve become, but they support my efforts. My mom has been down since day one; she knows everything about Skateboarding and stays on top of the scene.

You hosted some Ian Tilmann Events in the past, will we see you work with them again anytime soon?

I totally support the Ian Tilmann Foundation and what they’ve done.
They’ve taken a tragedy and embraced it and made it into a positive thing.
I’m going to travel with them some more in the future. Barry and Marcy Tilmann are the best!

You seem to be full of energy what’s the force behind your drive?

The people caught up in the struggle doing what they like to do really push me to do good things. Just like Coping Block, is an underdog but continues to grow and gain market and respect. Things like that inspire me.

Thanks Morgan, any last words?

Stay off your face man!