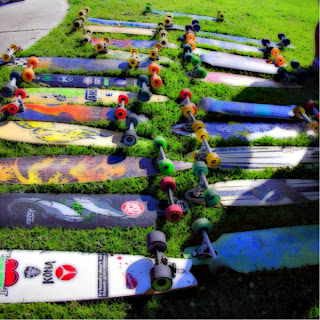 Erik are we going to see a cultural war between Longboarding and Street skating?

No Cleo, although the commercial interests behind street have programmed a lot of angst among the teenybopper/skinny jeans crowd, Longboarding is so inclusive that there's just not enough reason to worry or "compete" with "street".  Longboarders tend to be less about fashion, fitting in or clubiness...more of a "just skate" mentality.   The culture accepts skaters for skating and doesn't have the vibe to support much of a "cultural war", even as it continues to take over.

Erik, what is it about Longboarding that makes it so addictive to it's participants?

It's fun.  It's fast.  It's freedom on a plank of wood.  It's unbounded by fashionistas, and anyone can get into it without concern whether they have to commit to any level from casual to total immersion.  Just skate it.

Erik, Downhill, Free Riding, Freestyle, Parking Garages, and other forms of Longboarding are sprouting up all over the United States, which is growing the fastest?

Cleo,"Freeriding" is a really big term that has sort of swallowed up "all-arounder" longboarding, so that's definitely what's growing the most, since it includes downhill, parking garages, carving, cruising...whatever.  The other area where longboarding is growing huge is in personal transportation:  on high school and college campuses, the longboard is the quiet, fast, smooth, efficient way to have fun while getting to class and then you don't have to let it rust in a bike rack when you get there. 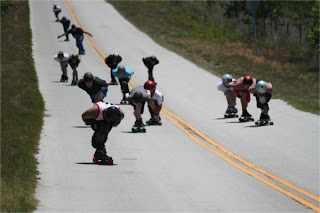 One of many little known hills in Florida, yes, Florida!

One last question Erik, what advice do you have for the upstart Longboarders out there reading this? 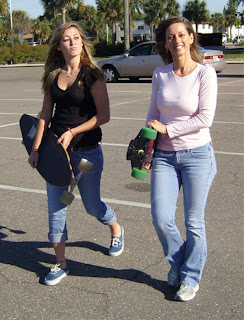 Mike, have you seen in increase in female Longboarders in your area?

Cleo, the NYC  skate scene has had a huge increase of ladies on the longboard scene.  Casual cruisers and full leathered up chicks are mashing the streets and creating a new niche in the skate market.

Mike,  what makes Bustin Boards so cool with the youth?

Cleo, Bustin is a grassroots family owned and operated company that targets first time users.  Bustin Custom Longboards are designed to the specifications of each unique rider depending on individual needs.  New customers are drawn to Bustin by fellow Bustin riders and the cycle keeps turning.

Mike, explain the "Push Culture" and it's scene where you live.

Well Cleo, Push Culture is a term used to describe our general population of riders.  Push Culture is about commuting from Point A to Point B and the adventure in between.  New York City skaters must adapt to fast paced streets and skaters step up their game for survival.  Enough time spent doing the same routine and you’ll get good at it.  Push to work, work to push. 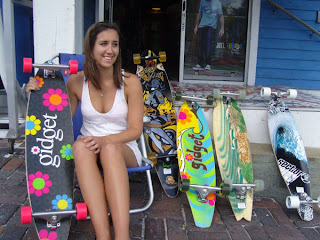 Mike, where are the Bustin Board stores located and what's the fastest way for someone to get one of your decks?

Bustin Custom Longboards has a production facility at 340 Grand St, Brooklyn, NY 11211.  The BK location is the shipping fulfillment center for online sales and has a small core shop inside open 10am-6pm.

Longboard Loft NYC by Bustin Boards opened April 1st, 2011 – located at 132 Allen St in Manhattan’s Lower East Side.  Both locations are a few blocks away from the base of the Williamsburg Bridge on Brooklyn and Manhattan sides, the most notorious longboard hill in NYC.

Thanks for sharing Mike!

Bustin's got your back Cleo! 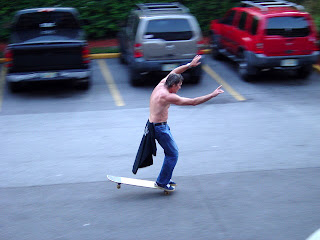 Bruce, when did you first ride Longboards and what about them grabbed your attention?

After having ridden short skateboards for over 12 years, I rode a long skateboard for the first time in 1975 in Pensacola, Florida.  The local surf/skate crew had built a solid hardwood longboard that was maybe 45" long and I tried it and loved it.  The ride was very surf-oriented as we skated a hill with multiple banked driveways on both sides of the road that doubled for waves and each provided an opportunity to carve turns and bert slides.  I enjoyed it so much that I've been primarily riding longboards ever since.  After Pensacola, I went back to our Melbourne Beach factory and immediately started manufacturing and selling 36", 42" and 48" longboards. 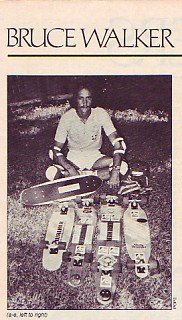 Why do you think there's a resurgence of Longboards amongst the public?

Cleo,  the concept of a skateboard as transportation to check the surf is ruling the day and longboards are perfect for that.  Generally, the mass population of people on earth will shy away from high-performance skateboarding because they are intimidated by it and deem themselves to be unqualified to be busting out big moves.  In the past, the easiest path was to not skate at all.  That way a person didn't subject themselves to possible criticism from their peers for not being very good at skateboarding.  That's changed a lot now that it's become cool to just cruise on a skateboard with big, soft wheels, primarily for transportation.  When you're riding a flat pintail longboard with no kicktail, nobody expects you to perform, so that let's everyone off the hook.  Everyone's doing it now because anyone can do it and fit right in. 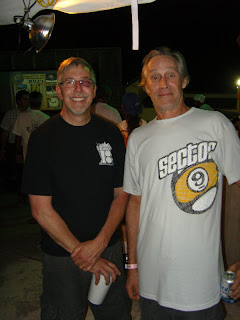 Paul Schmitt and Bruce Walker at the Florida Skateboarder Hall Of Fame Ceremonies. 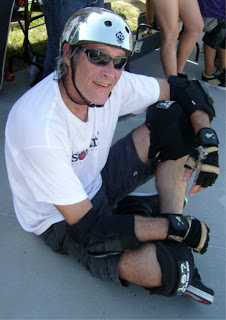 Bruce, is Walker Skateboards producing any fresh Longboards and if so how can people order them?

Cleo, I closed down my Walker skateboard manufacturing in 1991 and spent the next decade at Ocean Avenue Distribution concentrating instead on the distribution of a variety of skateboard brands to skate shops nationally and internationally.  After more than 33 years, I sold the company to Reggie Barnes in 2005 so he is now the owner of both the Walker and Ocean Avenue labels.  He too, concentrates on distribution and not manufacturing, so there are no new Walker products being produced or sold at this time.  I've been personally sponsored by Sector 9 for many years now and they are releasing the Sector Nine 42" x 8.5" Bruce Walker Pro Model 8-Ply longboard in late 2011.  It will be Sector Nine's second pro model ever, as they currently produce the Joel Tudor Pro Model.  The most important feature of my deck is the 8-Ply hardwood maple construction which provides for a more rigid, snappier flex than the sponge-like flex of the typical 7-Ply longboard.  It will be the only 8-Ply in Sector Nine's 2012 product lineup so ask for it at your local S9 dealer.

Cleo, Thanks for including my input in your Longboard issue.

I had to include the Florida Longboard legend Bruce Walker! 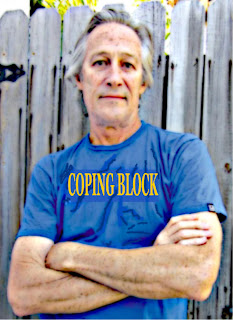