About A Skater named Ian Tilmann 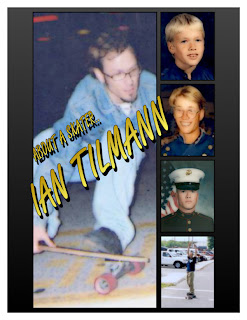 About a Skater named Ian:

Ian Tilmann, a young man no different than any other neighborhood skater with a skate crew and a love for skateboarding.  Ian was an all American kid from the Tampa Bay area, and a graduate of Countryside High School located in beautiful Clearwater Florida. His passion for skateboarding and immense energy is being passed around to skaters all across America today unlike any other skater.  Like most skaters around the globe Ian experienced periods of skating that where heavier than others. Times spent on board and times spent off board. Ask any skater who’s been off board for some time and they’ll share with you their eagerness to get back on board! It’s that relentless desire and drive that this rolling addiction freely generates that captured Ian. He started skateboarding in middle school and continued until his high school years, where he spent less time on board due to his involvement in and with music. Music has always been a big part of skateboarding and there are many skaters like Ian who are talented enough to have participated in both. Skaters like Chuck Treece, Duane Peters, Steven Fisher, Todd Webb, Lance Conklin, Stevie Caballero, Adrian Demain, and a host of others. Ian’s talents were just getting ignited during his high school years.

In nineteen ninety eight Ian expanded his skateboarding to include Longboarding. Longboarding increased the freedom that Ian loved about skateboarding and he loved to feel the wind in his face and the fun it provided him. Not one to ever shy away from responsibility, Ian joined the U.S. Marine Corp because he wanted to serve his country, and he did for four years.   While in the U.S. Marine Corp, Ian’s need for speed on those Carolina hills where he was stationed at Cherry Point also included down-hill on in-line skates. Versatility on wheels takes talent and Ian oozed both.

Ian fueled jets in the Marines but was unable to get hired in the private sector after his military service was completed. So, Ian decided he wanted to become a recording engineer in the music industry. He was going to go to Arizona to school for recording, but being the adventurous soul that Ian was, he bought a ticket to Montana and left home with nothing more than a back pack and intentions on hooking up with the Rainbow People.  (A group of hippies) In Butte Montana there was going to be a Rainbow gathering and Ian wanted to be a part of that gathering, and he was.  When Ian left the gathering he traveled on foot but caught a ride on a Hippie Bus, the types with flowers painted on the sides. It was while he was on that bus that he traveled across the continental divide.  Part of the time Ian hitched hiked, some of the time he was on foot.  Ian ventured out to California, Arizona, New Mexico, Colorado, Utah, Iowa, Nebraska, and Oklahoma.  Ian also traveled to the Chicago area to visit one of his brothers in the windy city as well.  Skateboarding was always on his mind during his travels. 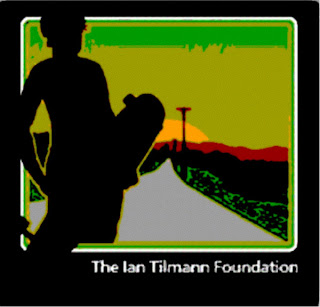 During this journey, Ian ran into all kinds of people, a sunglass salesperson that bought him breakfast and wanted to know how long it had been since he had eaten.  The kind sunglass salesperson also gave Ian a ride down the road a ways.  Ian met an anarchist, and a host of other interesting individuals. One day Ian met an East Indian gentleman named Chief, at least that’s what Ian called him, and Chief had been wandering the planet for some forty years. He told Ian that he had walked around the world three times.   Chief showed Ian the ropes on how to eat clean food from garbage cans, and how to get clothes from the Salvation Army.  In the evenings Ian would set up a tent in the desert, just he and his back pack. This journey of Ian’s lasted for about a half a year on foot before returning to his folks and his skateboard.
When he got home he was very wooly.  He had to get back home in time for his brother’s wedding.  His family refers to this time in Ian’s life as his “Walk About.”

Like many skaters Ian had a pet.  Ian’s pet was a cat named “NoToe”.  “NoToe” was a big toe attacker during his time as a kitten, and Ian was constantly telling this cat, “NO TOE”!   Ian always felt that names should have significance and thus the name “NOTOE”.  Longboarding with his brother was one of Ian’s favorite activities and once he returned home the two of them skated the streets together frequently at night.
It was during one of those nights while Ian’s mother was sitting in the family room playing cards with friends, that she got the news that her son Ian had been hurt in an accident.  Ian had been out skateboarding together as he did every night. He and his brother would usually go out around eight or nine after the traffic died down because they were street skating.  The two of them usually boarded until around two or three in the morning, and then they’d get up and go to work at seven. They were serious about skateboarding and they loved it. On this night Ian had fallen off his longboard around ten thirty. 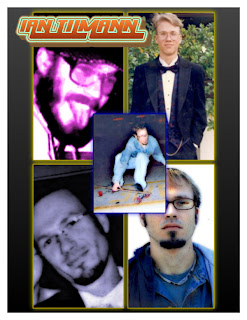 Ian had fallen and he wasn’t getting back up.  Ian was twenty eight years old, he was a U.S. Marine Corp Veteran, and he loved skateboarding.  Ian loved to feel the wind as he carved the hills. His favorite local skate spot was Cemetery Hill over in Clearwater, about four or five blocks south of Clearwater High School. He loved to bomb that hill, carve it around; it was one of Ian’s sweet spots.
One of his favorite sweet spots was at Ruth Eckerd Hall going around the buildings ramp. He and his skate crew liked Super Target as well, they all would go down the Truck Parking wells, and go underneath the parked Semi’s at speed and then power slide once they cruised out on the other side.  They utilized plastic milk crates to slow down with instead of gloves with pucks.  But it was while riding down Cemetery Hill in Clearwater Florida that Ian took a really hard fall; a fall hard enough to change the lives of thousands of skateboarders worldwide.

Ian’s fall had caused blood to flow out of his nose and ears and part of his skull had been crushed.  Ian had hit his head against the road hard enough to spit his skull from ear to ear on a routine bail.  Although the exact cause of the Ian’s fall had not been determined, other skaters suspected he got speed wobbles at speed on the straight away portion of the run.
That’s the funny thing about physics, when it takes over you’re usually unprepared to be pitched and bucked off your skate deck to your head, and that my friend’s is how most of these skateboarding accidents occur. When you least expect it. Ian had no scrapes, no other injuries from the fall, just a massive head slam.  Ian was not wearing a helmet. 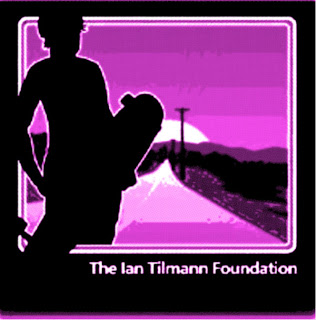 The average age of skaters dying from a skate accident is over the age of twenty and the most frequent cause is a fall to the head while not wearing a helmet.  At Saint Petersburg Florida’s Bayfront Medical Center Ian was induced into a coma, where he lay for ten days.  Ian had a drain installed into his head to remove the excess fluid but after three days there was brain matter in the drain. So his brain had started to liquefy.  Ian was gone.  His family had him removed from life support.
Frequently in longboarding accidents where there’s a death by head injury the brain stem is sheared away from the brain. When you bang your head during a fall your brain bangs against the skull and you get a brain bruise, but if you hit hard enough you simple shear the brain stem away from the brain and it’s a fatal injury. 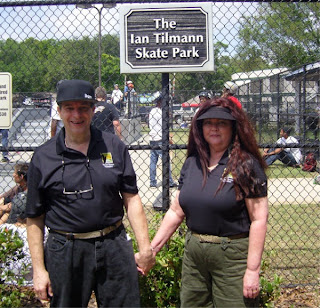 Ian was an awesome person, and this message is from Ian to other skaters that you really should wear a helmet.  The Ian Tilmann Foundation is an all-volunteer public charity; the family gets no profit from their efforts.  They simply want to put helmets on other heads to prevent other families from going through what they went through. If Ian were here today he would say put on a helmet dude!

Ian has been gone now seven years this May 2012. Ian was disconnected on May 26th 2005.  It is a nasty way to die.  Skaters should know that in some instances you might not die. You could become a vegetable.
Ian’s parents have met people at the Brain Injury Association that take five minutes to say their name, or they can’t walk properly.  They don’t communicate well. There are many other debilitating afflictions from needless head injuries, like constant headaches, epilepsy, and you may not want to wear a helmet now, but after some injuries you might be made to wear a helmet because you might black out during a seizure and hit your head again. The Tilmann’s have even supplied free helmets to persons with brain injuries because they have to wear them all the time. If they are not in bed, they have a helmet on.  A skater could be relegated to wear a helmet in their daily life because they chose not to wear one while they skateboarded. 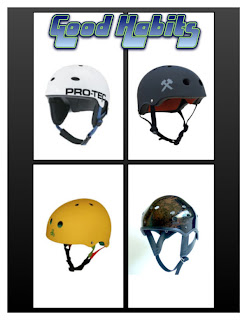 Skateboarding is a sport that utilizes equipment, it does not involve toys.  It takes talent, it takes skill, and it takes practice.  If Skateboarding were that easy to do everybody would do it. The Tilmann’s believe skaters should give the sport the respect it’s due and wear the proper safety equipment. You won't see a race car driver get into a car without a flame resistant suit, helmet, and all kinds of harnesses and belts.  Football players wear safety equipment, baseball players wear safety equipment, and even soccer players wear shin guards. What makes it uncool to care for your personal safety? Use your brain instead of injuring your brain and leaving yourself debilitated.  On average, fifty two skateboarders per year die from fatal head injuries, approximately one per week.   A total of 23,114 Skateboarders went to emergency facilities in 2009 from head injuries. That’s three per hour twenty four seven, three sixty five.

Detractors say they want to make wearing a helmet a personal choice. “It’s hard for a choice to be made when both sides are not given to the skaters”, says Marcy Ian’s mother.  They want freedom of choice for skaters but they aren’t giving them both sides of the story.  They like to say to young skaters that it’s a free and easy sport; they don’t like to mention safety. Helmets aren’t really promoted in the sport, and that’s a shame she says.  Many national skateboarding focused publications don’t show photos with skaters wearing helmets. 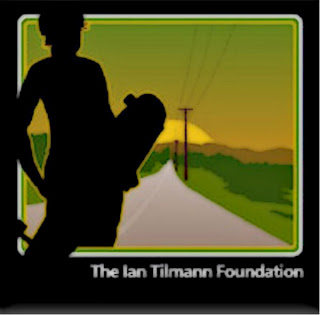