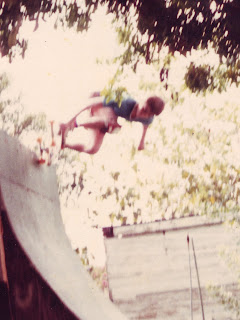 Walter let's get right into it, where and when did you first start skateboarding?

I first started skateboarding in 1976 when wide world of skateboarding magazine started appearing in the news rack at Lil General store in St.Petersburg, Florida. I went to church camp that year and some surfer skaters Nick Kurz and Dale Allen let me ride their "Banzai aluminum" board.

What was your first set up?

My first "real" board was a Bahne watermelon with Chicago trucks and Weber performer wheels. It was used and had duct tape on the nose.

You have always had an aggro skate style and philosophy to your skateboarding, who were your earliest influences?

My earliest influences would be seeing Matt Davies at a Toys r Us demo and skaters at Earthin Surfin like Chris Moriarity, Michael Daly, and Jay Hamilton.

You were able to skate many of the earliest concrete skate parks in the state of Florida, did you have a favorite and if so what did you like about it?

I liked Earthin Surfin since I went there the most. I liked the snake runs. I have skated I believe every park in the Tampa area including Surferdrome, the place next to Oil can Henry's in Bradenton, Coquina, Skate Wave, Clearwater, McGill’s, Rollin, Sensation, and Lately New Tampa. 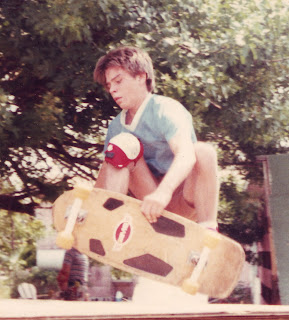 You spent time skating with the St.Petersburg, Crew at both the Nacho Ramp and the Grigley Vert ramp, how did those sessions influence your desire to create your own line of skateboards?

I started building them because of my interest in them and I couldn’t afford to buy more than a board or two a year. I started building boards at home then at Gibbs High School in 1977. Later I tried to do some of the great ideas developed during cracking sessions and slurpee runs.

Where and when did you start building skateboards?

At home, and then Gibbs High School Woodshop. The school had a press that was perfect, and made a rocker kick, which was cool. I then put Formica on the bottom, which looked good and was slick.

When did you come up with "MSD" Manual Skate Device?

During a your momma cracking session at Bruce Whiteside's house.

What were the decks dimensions what combinations of wood did you experiment with?

The boards I built at school I used ash with a 1/4" bottom ply and then combos of thin ply's above, and Formica. 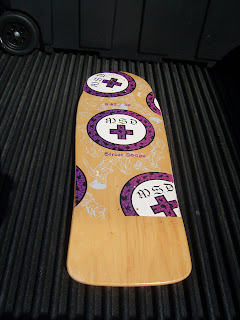 Let's get into your skate relationship with Paul Schmitt; did you ever discuss with him glue strengths, lamination combinations, or construction techniques in the distant past?

All of the above I used to pick his brain when I would visit him in the 80's and 90's. He took me around to different woodshops, Upland etc.

Were you at the ramp the day Paul rode straight through the quarter pipe transition and ended up having a ramp around his upper chest?

Yes and I have a knot on my head still from Paul's board, that flew out like 50' in the air one day and hit me in the head. 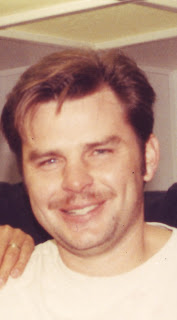 The knot now gone from the head of Walter.

I know that you worked with both Bruce Whiteside and John Grigley in developing board graphics, what was their input?

They are both artistically savvy and can translate ideas into reality without much explaining.

When did you first come up with the concept of "SANITATION" Skateboards and Clothing?

I thought that it was alternative realm and was clean. I was trying to do something different than skulls. Growing up in the Burg I was inspired by the Sanitation dept.

What were some of the T-Shirts that "SANITATION" produced?

Will we see any new stuff from Sanitation in the near future? 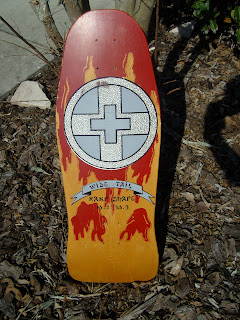 You have one of the most creative minds in skateboarding, but you never really exploited your talents to the masses. You are the quintessential idea guy, why hold back?

I am into consistency over time so I take my time...

Elaborate on 100% Rocks and Easter Island heads as graphics.

Hanging out with Cleo in the 80's and Paul Sneed.

For the following one-word questions, please answer with the first word that comes to mind.

Micro companies are one of the best things about Skateboarding. Idea's translated into reality and sometimes into mega companies. What future plans do you have for skateboarding?

I plan to keep riding and potentially produce some products later in this decade. 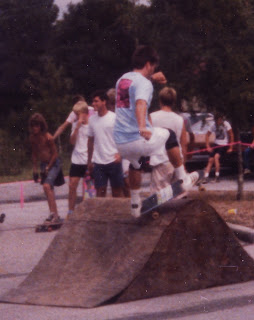 Walter Lewellen enjoying some edge play for the fun of it.

If you could design your own skate park what would it be like?

I like the new parks, but they should have snake runs or gravity runs and be a little less cluttered. These parks need a consistent concrete half pipe with long even sides.

What single skateboarder do you respect the most out of all others?

Don’t have a single one have many that I respect.  Seeing Matt Davies blow away the California Free Former team at Toys R Us. Growing up Mike Folmer gave me like a large quantity of Sims stickers. Bruce Whiteside, John Grigley, Cleo Coney, Thom Nickelson, Paul Schmitt, Bill Procko.

Have you ever thought about how the crew of skaters you grew up skating with have influenced the sport over the years?

Will you ever consider producing snowboards or snowboard related gear?

What's your opinion of the new skate parks?

They try to pack too much stuff in, the concrete is so smooth and they are well built. The wood parks are too slippery for me.

What was your participation in getting the New Tampa Park built?

My neighbor was the number 2 guy in the City of Tampa parks dept and I constantly told him about Team Pain concrete parks, after about 3 years he was able to pass it on and we got lucky. 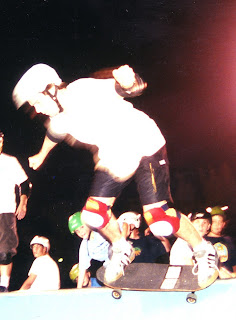 As a young skater what was your dream set up?

You can always do it and you meet some exceptional friends. When I showed up at Tyrone mall Champs sports and Barry Zaritsky's voice was gone so I MC'd for Rodney Mullen and he was surprised I could do it.

When I skate I think about war, when I fall I am not dead. Also, I would like to thank Mrs. Grigley and Mrs. Whiteside for letting us build and skate ramps in their backyards.