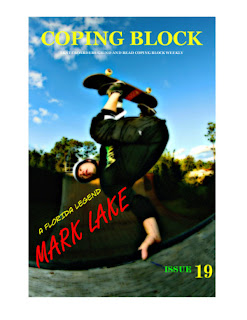 
Brought to you by:

Mark first let me thank you for allowing Coping Block to have a few words with you.
You have skated for sometime, and in that time you have earned major respect from your skate peers through years of shredding. Let’s start from when you first picked up a skateboard, when did that happen?

I got my first skateboard in 1967; I was ten years old at the time.  My brother Mike made the board from a street sign shaping it into a deck. The wheels came from an old pair of roller skates, which he cut in half.

You had the opportunity to skate some classic skate parks here in Florida, which one sticks out in your mind as the most fun?

It would have to be Indian Harbor Beach (IHB) Skate Park.  It was the local skate park in Melbourne, I skated the park just about every day until it closed. It had a big fast snake run with a vert extension in one bowl. A few of my other favorite skate parks were in Ft. Lauderdale; they were Skateboard Heaven, Skateboard USA, and Paved Wave in Cocoa Beach because it was the first park I skated. 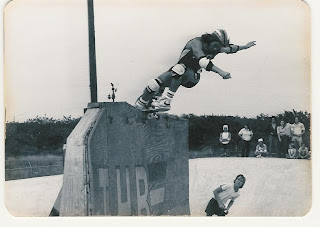 Who was your first sponsor and how did that come about?

There was a Surf and Skate trade show in Melbourne that I went to, it was a good day for me; three sponsors picked me up. The owners from Flite Skateboards out of Rhode Island were looking for skaters to sponsor. The owners went to the Indian Harbor Beach Skate Park and saw me skate and asked me to join their skate team. Also, I got picked up by Tracker Trucks, and Excellarator Wheels!

How did your family respond to your skateboarding addiction?

My Mom and Dad were both totally into it; we lived across the street from the beach, so all we did was surf-n-skate.  We built one of the first big vert half pipes in Florida in our backyard. Back then there was no such thing as flat bottom.  The ramp had a ten-foot transition with two feet of vert, no flat.  Skaters from all over the county came to skate that ramp. When the movie Skateboard Madness was filmed, they came to my house to shoot some of the footage. Another good day of skating!!!

When did you turn PRO?

I turned PRO in 1978 for Flite Skateboards, that’s when I started traveling a lot. 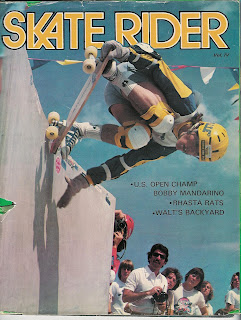 Mark Lake on the cover of Skate Rider

Who were your major competitors during that time?

My first PRO Contest was at the Kona Nationals. I skated against Tony Alva, Jay Adams, David Hackett, Mike Weed, and Shawn Petty.  There were so many good skaters back then I couldn’t fit the list of the skaters on this page. Shogo Kubo, Chris Strople, Mike Folmer, etc.

Did you ever want to leave Florida for California on a permanent basis?

No, I have always loved the East Coast and Florida has always been my home. I have some good friends that I have always skated with here.  When I traveled to California it was always great, I learned new tricks to bring back east, but I always looked forward to coming home. To me, Florida was different; we did not have skate parks on every corner, or the magazine that would give you a lot of exposure.  We built all of our own ramps; most of them were in the middle of the woods hidden by trees. You had to LOVE SKATING, just day after day of pure skating with your friends, to me that’s what skating is all about.

The shape of your model is fish like, when did you come up with that design?

I believe it was around 1985. We were skating Sun Tree Ramp (which we built), back then it was a nine-foot transition with a foot and a half of vert.  I got the idea for the hooks on the front of the board when my hands kept slipping off from the sweat when doing airs and the hook on the tail was for slides hooking your toe or heal to keep the board sliding with you.  The board was designed for function; it was so different a lot of skaters did not know what to think about it. I will say, “It was a fun board to ride and a lot of good skaters use to ride them. 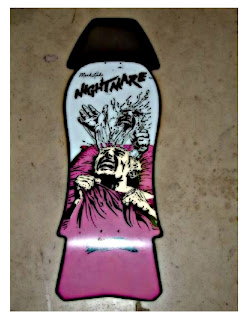 When did Lake Boards come out?

I started Lake Skates in 1987. I came out with ten different skateboard designs with graphics and ten skateboard designs that I called “Lake Naked Decks” no graphics. We had t-shirts, stickers and grip tape.  Lake Skates grew really fast in a short period, it was hard trying to run the company, manage the team, travel doing demos and contests. It was one of the most enjoyable times I had skating.  Skaters were so loyal back then and committed to whom they skated for, we had a killer team.

You’ve had some injuries over the years; I remember an ankle injury you got at the St. Pete Ramp back in the day. I believe on of my best friends, Joey Foronda’s mom was your doctor at the time, how are you today and what kind of and what other set backs have you’ve experienced?

Yes, that was in 1984, the ankle break was really bad, the entire ball and socket were broke off and in two pieces, they pinned my ankle back together. They told me there was a possibility that the bone could die and I would end up with a clubfoot.  But I was lucky, and everything healed and I was back skating in eight months.  I was injury free until 1996 when I tore my left rotator cuff in a little four foot concrete bowl doing a layback slide. I had surgery and was in physical therapy, which kept me from skating for about a year.  Then in 1997, my first day back at the skate park I put my right arm out to break a fall and tore my right rotator cuff, surgery again and another year of no skating.
Then I had another great run with no injuries until 2006, when I slammed on a hip-hop invert at Olliewood. This time the left rotator cuff was detached, this injury was worse than the first two rotator cuff injuries, but the recovery from surgery and physical therapy was quick because I knew what to do this time, especially how important the physical therapy was with regard to regaining use and strength.
Than in 2007, I detached my left biceps, surgery and physical therapy again, and I was back skating within two months, no big deal this time.  Than in 2008, riding a mini ramp, I locked up on a rock to fakie and slammed on my right shoulder.  This time I had a detached rotator cuff and torn biceps, so surgery and physical therapy, again.
Thank GOD for good doctors, they just keep putting me back together, the doctors know that the injuries I have sustained will not keep me from skating, I am addicted. I have been back skating for about three weeks now, the beginning of June. I have been skating Olliewood once a week and hope to come skate the Tampa Red Bull Ramp soon. 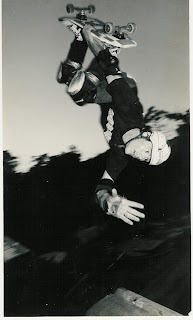 You are a very determined soul, motivated, aggro, focused and energized. How do you get the steel you have in your belly, to get back on your board?

That is an easy question for me to answer, “ I love to skate, and it is in my blood and has and will always be a big part of my life”.

Where do you skate frequently and with whom?

I have been skating at Olliewood; it’s one of the only vert places in South Florida left to skate. Some of the local skaters that I skate with at Olliewood are Mark Carpenter, Andrew Murray, Dan Murray, Chris Griffiths, Kurt B., Lloyd G., Fion and Junior (Lake).

Do you have a preference, Ramps or Pools?

If I had to choose, first vert ramps second flow parks and third would be pools. 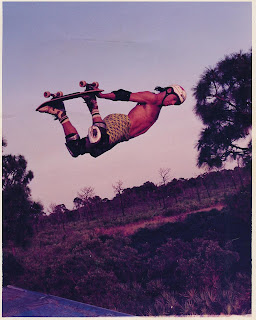 Who are your all-time favorite Florida skaters?

Looking back, would’ve, could’ve, should’ve, is there anything in your skateboarding career you’d have done differently?

Maybe of moved to California long enough to make some money. Staying on the East Coast there just wasn’t enough opportunity to make the money a skater could make living in California as a PRO skater. Otherwise, I wouldn’t change a thing; it’s been such an awesome experience. I have skated through the 70’s, 80’s, 90’s, and now the 2000’s. WHAT A TRIP IT HAS BEEN!!

It was a surprise, there are so many good skaters in Florida, and for your peers to vote you in is a great feeling. All of us who have skated and stayed here on the East Coast skate because we have a passion for it.  It was great winning contests and getting my picture in the magazines, but what I have enjoyed the most about my life skating is the bond that comes with the people I have met through the years. It’s an honor to be in the Hall of Fame, and thanks to Steve Marinak for making it happen. 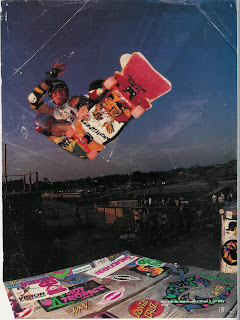 What skateboarding advice do you have for all those young skaters that will read this?

Don’t be afraid to train and workout to make your body strong so you can skate to your best potential. Also, so your body can handle the big slams and so you are able to get up and continue skating.  Don’t ever get an attitude because you skate better then someone; be humble because you are the lucky one. Today, you can make a good living from skating, so if you love to skate and it’s in your blood go after it.  Most important, skate because you love it, though the years you will develop life time friendships.
Always remember, no pain, no gain!

What does the skate future hold for Mark Lake?

The same as it has always been, more skating, maybe a book.

Anybody or company you’d like to thank at this time?

Thank you to my daughter Marlee, my Dad and the entire family for all their years of support.  As for
Help support Coping Block Skateboarding Magazine by sending your gift to "Coping Block Skateboarding Magazine" P.O Box 13012 Saint Petersburg, Florida 33733 Thanks in advance! he others, the list would be too long, so anybody who I’ve skated with and all my past sponsors, and Coping Block for letting me share some of my experiences from skating.  Skate Fast, Skate Hard!