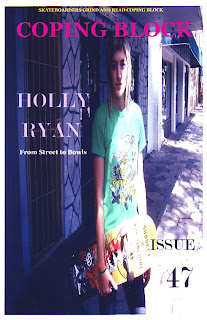 Holly, how long have you’ve been in Florida?

What brought you here?

My husband Justin and I were ready for something different, we both had been in the mid-west our whole lives, I grew up in Illinois and he grew up in Iowa. The winters were very gnarly, and the older you get your bones just can’t handle it anymore. LOL!

How did you two meet?

We met through skateboarding, he was a part owner in a skate shop in Des Moines Iowa,
during the same time I was going to school about an hour away in Iowa City. I met him at the skate shop there. In the winter we didn’t have any place to skate, but Des Moines had a roller rink that would bring ramps out twice a week and we’d drive over an hour to skate every week on Wednesdays and Saturdays in winter conditions like sleet and blizzards just to skate.  If we didn’t drive there, we wouldn’t get to do anything.

That’s serious commitment! What got you into skating in the first place?

Well, when I was a twelve- year old girl growing up in the country, like really deep country. We had one neighbor and they had three kids, and I was friends with the their daughter and her brother skated.  When I’d go up to visit her and hang out, I remember he had pieces of plywood laid out and up against a pile of logs.

No way! He was skating up logs?

Yeah, plywood going up logs, we were deep in the country.

It was a country ramp!

Yeah! We were in the country outside of town, all trees and dirt roads.
I went up there to visit my friend and he was dropping in and then riding down the ramp into the grass. It was probable about five feet tall.

That is the raddest thing I’ve heard!

So I got up there and I was like, “I wanna do it”! Cause I was always following my brother around, and he was into motocross and he was friends with our neighbors oldest boy and they’d be out riding around on motorcycles while I was skating on the country ramp. Then one day our road got black top and that’s when I decided I wanted a skateboard.
Ok, so when I first started skating it was mostly street because that's all we had unless we built little crappy stuff.  One day I was on my way home and near our house is a bridge that crosses over a little creek.  I saw some wooden thing floating in it that looked like a 3 foot launch ramp.  It wasn't far from my house so I figured I could get that thing home somehow so I walked down there into the water and dragged the thing out with giant spiders running off of it.  Got it home, my friend helped me clean it up and resurface it, and I put it in my basement.  That's what I learned to drop in on.  It was only 3 foot tall and maybe 3 feet wide, pretty narrow but it worked and I was so excited.  Eventually I had a launch ramp, parking block I got for my birthday, weird flat bar made of PVC coping, a grind box, and an itty-bitty mini ramp all in my basement.  It was pretty rad, especially in the winter. I'm very lucky that we had a large sized basement for all of that and parents that let me do it.  I miss it now. 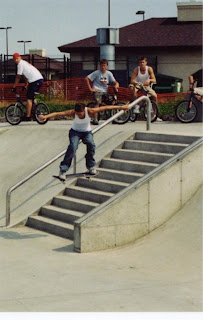 Holly putting her skills on display.

What was your first skateboard?

We didn’t have any mags or skate shops or anything, I had to order from CCS and got a Fred Smith III, with Gullwing trucks and I can’t remember the wheels I think maybe Slimeballs. LOL!

That’s crazy! So, later you meet your future husband at the place he does business?

Yeah, when I was living in Iowa City I became friends with the Des Moines skate crew and we’d go to his shop. We were friends for a long while before we started dating.

Now you guys have been married for how long?

Two years, but we’ve been together for eight.

Taking it slow, LOL before we got married.

So getting married is great, but it really didn’t change much, I got my name changed. 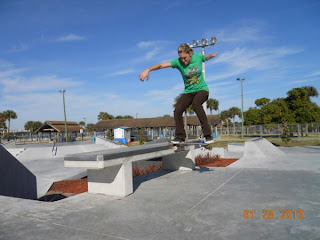 It’s more free skating, not being confined to one little area.
Where I grew up skating we just cruised around, we didn’t have a big town but we did have a campus, and we found what was good and skated it. You get more creative that way I think, instead of building stuff to skate.

Is your husband Justin a street skater, or does he get into ramps too?

We both really just like “Skateboarding”, we don’t have categories or labels, we are just skaters. We like everyone and skate everything, except that I don’t like spine ramps. LOL! Those things kill me! LOL! I used to skate them though.

What’s the response you get from other women your age when they find out you’re a skater?

Well, I haven’t really met many other women from outside the sport my age. I have a group of female friends back home but most of them skate too. But I also have close female friends that don’t skate at all that respect the sport and think it’s cool.

I like the speed!  I love carving and hitting coping! The feeling of hitting pool coping is not something I was used to growing up on ramps with steel coping everywhere.
The first time I hit pool coping was so different, it felt kind of like street skating in a way.
It was raw and I like the way it sounds, it was like grinding concrete in the street. 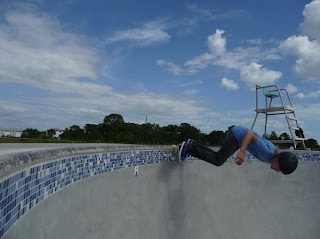 Are you apart of the GRO organization?

I would like to be, I help out when they come here, and I definitely support it!

Who are some of the other female skaters that you session with?

Noelle, who lives in Sarasota and Courtney who’s about fourteen, she’s a little ripper!

Do you mainly skate at the Skate Park Of Tampa? 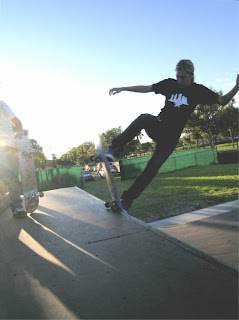 What advice would you give to young girls who want to get into skateboarding or who have only just beginning to skate?

Do your own thing, don’t listen to the negative people, don’t worry about the little kids that come up to you and ask silly questions.

How supportive has your family been with your skating?

My mom has always been super proud of me! She liked the idea that I was doing something out of the norm especially for a girl. She’d take us to skate parks and my dad seemed pretty proud, I’ve been pretty lucky. 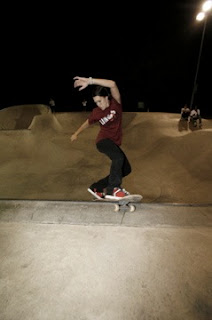 I feel like I’ve transformed in my skating. In the beginning I skated street more, and then gradually I started skating transition more and more.

You like that bowl they have at the Skate Park Of Tampa?

What kind of tricks are you pulling in it these days?

Well I haven’t been doing too many new tricks in a while, shame on me.
But ah, I like blunt to fakies probable the most recent trick I learned, ah, frontside rocks, and frontside lipslides. I love frontside rocks they feel good.

They feel good don’t they!

Yeah, I like those they’re fun, I like getting all twisted up!
I want to get all my tricks back to back, to be able to pull them all in a run back to back.

Have you been over to the New Symrna pool yet?

How about the Englewood Pool down South?

Yeah! That’s hot, we went down there pretty recently.
Met some friends down their, I’ve actually met more girl skaters here in Florida then anywhere else.

Do you keep in touch with other girl skaters on Facebook?

No, not really, I’m friends with like three of them.

I think there’s like three Holly’s that skate and that rip, yourself included.

Yeah, I always want to meet new girl skaters, because I would like to skate with more girls.  It helps motivate you when there are other girls in the session.

Were you stoked when you saw the footage of Lindsay Hawkins, the first female to pull off a McTwist in Paris at Tony Hawks traveling skate show?

Yeah! I can’t even imagine what that feels like!

What other Florida parks have you skated?

I Skated the Orlando Skate Park, and I’ve been to Ovideo as well.

What do you think about Florida now that you’ve lived here?

I had people tell me that Florida was too hot and I would take the heat over minus twenty degrees any day! LOL!

I feel you on that, LOL!

Not having to go out and dig your car out of the driveway, just being able to go out and go skating. Plus I can go ride my motorcycle and we’ve met a lot of cool people down here.

What would you do to promote skateboarding to females? 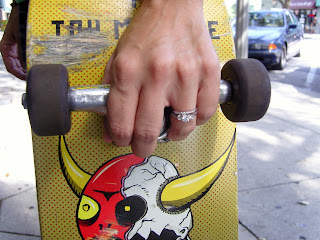 Where do you really want to go skate?

I’d love to go back to Colorado and skate! There are some great places to skate there, and I’d just love to go skate whereever I can around the globe.

Where are the kids at?

No kids? No junior skaters in the household? What’s going on with that?

I want it to happen, but right now I’m not sure I’m ready to give up my freedom.
I don’t know how to say that, I want to have kids, but it’s scary.

I want to destroy it. 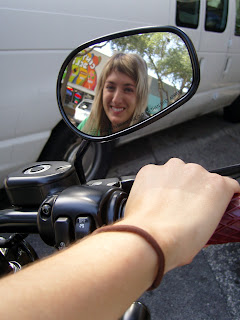 When you are watching skateboarding what makes you go “yeah”!

Skaters at speed, really long grinds, you know, when I see skaters get real aggressive it makes me want to get in there and skate too.

What do you like to do in the streets?

Where do you see yourself in five years in skateboarding?

Depends on my physical condition, but still skateboarding.

If a girl wants to skate with you, where and when do you session?

Most of the time I can be found Tuesday Nights at the Skate Park Of Tampa.
Sometimes when I just want to skate flat ground, I go to Fossil Skate Park in St. Petersburg. It’s not my favorite, but it’s close to home.

No, but I did snowboard back home.

Oh! You rip the snow?

You take the black runs?

That’s sick, you rip concrete and you rip the snow, I’m stoked!

I prefer to skate at parks that have no hours, no safety equipment requirements, no rules, just pure skateboarding. That’s how I started out.

Is there anybody you want to give a shout out to or a thank you?

Oh yeah, my husband Justin who has taught me so many things in skateboarding.
He pushes me and won’t let me take a step back. My family has always been supportive of me especially my Mom and Dad, the Skate parks in Iowa and the Skate Park Of Tampa for really being good to Justin and I. 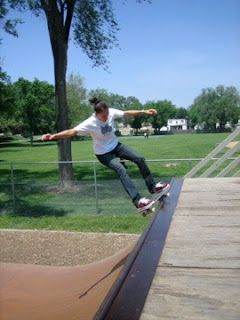